2018 Melges 32 Worlds All Set for Final Showdown in Cagliari 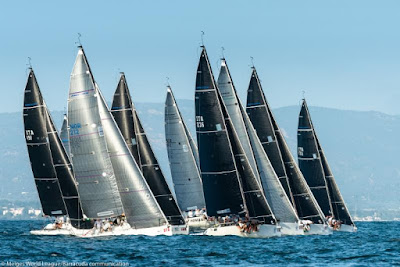 CAGLIARI, Italy (October 19, 2018) - After only one race at the Melges 32 World Championship in Cagliari today, the final day of competition, tomorrow (Saturday), is guaranteed to be intense and pressure driven. As Matteo Balestrero at the helm of GIOGI (Branko Brcin, tactician) moves into the official, overall event lead, defending World Champion Pavel Kuznetsov's TAVATUY (Evgeny Neugodnikov, tactician) remains within striking distance of the trophy, seated second with equal points.
Race Three proved to be the perfect match-up between Balestrero and Kuznetsov. After hours of waiting for raceable, light air conditions, a very nervous fleet started the one and only race of the day with two general recalls, then the inevitable black flag start. Balestrero was quick to get out front and extend for the win. Kuznetsov on the other hand lagged behind until about mid-race. An aggresive run to the finish put Kuznetsov across the line in second, just moments ahead of Vincenzo Onorato's MASCALZONE LATINO (Paul Goodison, tactician) in third.
The general fight however is far from over. Martin Reintjes' CAIPIRINHA (Gabriele Benussi, tactician) is seated only three points out from the top two leaders.
Mathematically speaking, there is a slim possibility that fourth overall Christian Schwoerer at the helm of LA PERICOLOSA (Nik Asher, tactician), and fifth place Edoardo Pavesio's FRA MARTINA(Manu Weiller, tactician) could easily find themselves in the running to win as well, at minimum a spot on the top three podium.
Kilian Holzapfel at the helm of HOMANIT is the leader of the Corinthian division.
It will be an early start for the fleet on the final day with a warning at 0900.
The Melges 32 World Championship is supported by Moby, Tirrenia, Helly Hansen, Garmin Marine, North Sails, Toremar, Norda, Lavazza, Rigoni di Asiago and Melges Europe.
Melges World League has signed and adopts the code of ethics of the Charta Smerarlda strongly promoting the values of One Ocean Foundation.
MEDIA AND RACING COVERAGE
As with all Melges 32 events around the world, racing updates will be posted online at the Official Melges 32 Facebook Page. Tune in for the latest racing information, results, video interviews, and photos. Race reports, press releases and photos will be available online each day post-racing at melges32.com.
TOP FIVE RESULTS (PRELIMINARY - After Three Races)
1.) (ITA) Matteo Balestrero/Branko Brcin, GIOGI; 2-4-1 = 7
2.) (RUS) Pavel Kuznetsov/Evgeny Neugodnikov, TAVATUY; 4-1-2 = 7
3.) (ITA) Martin Rientjes/Gabrielle Benussi, CAIPIRINHA; 3-3-4 = 10
4.) (GER) Christian Schwoerer/Nik Asher, LA PERICOLOSA; 1-11-6 = 18
5.) (ITA) Edoardo Pavesio/Manu Weiller, FRA MARTINA; 6-5-7 = 18
Full Results