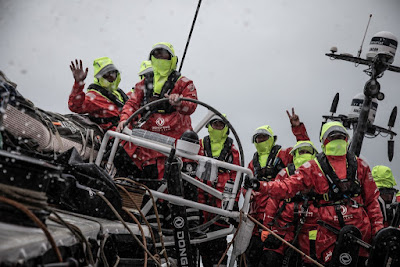 Dongfeng Race Team survived a difficult final 24 hours of a dramatic Leg 10 of the Volvo Ocean Race 2017-18 from Cardiff to Gothenburg, to finish fourth, despite a speed problem with their boat.    The mixed male and female multinational crew skippered by Charles Caudrelier of France is now tied on points at the top of the leaderboard with leg winner Team Brunel and leg runner-up MAPFRE.    The Volvo Ocean Race has never had a closer finish, with three boats each capable of clinching the coveted winner’s trophy at the end of the 700-mile Leg 11 from Gothenburg to The Hague which starts on Thursday.

Dongfeng Race Team had started Leg 10 five days ago as the overall leader. But they now find themselves in a three-way battle, having scored 64 points – one less than MAPFRE and Team Brunel - but with one bonus point for the fastest total elapsed time certain to be added to their score once the race is finished.


The remarkable aspect of their performance over the last eight months is that while MAPFRE and Team Brunel have won three legs each, Dongfeng has yet to win a single leg.


As the red and white Volvo Ocean 65 sponsored by Dongfeng Motor Corporation crossed the finish line and made her way into Gothenburg late in the evening local time, Caudrelier spoke confidently about his crews’ chances in the final showdown.


“We are all on the same points if we include our elapsed time point, so I imagine for everybody it is going to be a very exciting finishing last leg. For us I think it will be very exciting also,” he said, looking happy to have reached the end of a tough leg.


“We will fight as hard as the others are going to, for sure,” he said. “We will give it all we have and try to reach our first leg victory and maybe it will be fantastic, but we just have to be ahead of them – that is the only thing that we have to do. We can do it,” he added.


Caudrelier said his crew noticed the boat was going slower than it should have been as they blast-reached and then went upwind across the North Sea and were overtaken by MAPFRE, then Team AkzoNobel and then Turn the Tide on Plastic, before fighting back to re-take fourth place from Dee Caffari’s crew. This came after they backed the boat down to try to shake off anything that might be stuck on the keel.


“Of course we managed to come back but we had no choice,” Caudrelier explained. “Of course it would have been very hard not to do it. We had a big problem with speed over the last 24 hours until we did a backdown. Maybe we should have done the backdown 24 hours before. We checked every appendage many times and we saw nothing. It must have been at the top, top, top of the keel…I don’t know."


French crew member Kevin Escoffier said he is relishing the battle ahead. “We all have the same points and it means that the order we arrive in The Hague among the top-three boats will decide the podium of this Volvo Ocean Race – it is as simple as it is crazy.


“Now we have to push,” he added. “Now there is one leg we have to win for sure and it is the next one. As we said when we crossed the line here, ‘the next one is for us.’ The only thing that we have to look for and the only way to be happy and to finish the Volvo Ocean Race is to be first.”
Fellow crew member Carolijn Brouwer of the Netherlands said all the sailors on Dongfeng kept their focus as they searched for solutions to the speed issue towards the end of the leg from Cardiff.


“It was amazing. Everyone stayed calm and everyone was really chipping in and trying to help out, giving ideas as to what we could do to change or make the boat go faster. I don’t think anyone lost the plot or got really angry. We held it together and tried to make the best of a really bad situation and in the end we managed it quite well,” she said.


Like Escoffier and their skipper Caudrelier, Brouwer is already looking forward to the final battle with MAPFRE and Team Brunel. “Everyone is really fired up,” she said. “Never has a race finish been so close and to be able to say that you are part of it is actually pretty exciting in itself.


“I know it is going to be nerve-wracking but everyone still has smiles on their faces. We have had a tough leg but we have five days to recover, which is plenty and I think on board the mood is still really, really good. We really want this win, we really want a leg win and everyone is fired up and ready to go for the next one and to give it everything we’ve got,” she added.

Chinese sailor Xue Liu, also known as Black, reflected on the difficult period when Dongfeng lost places in the wild conditions in the North Sea. “It was painful - to go from leading, to then being second across the top of Ireland and then towards the last day to be so slow upwind and to have boats pass us and be unable to do anything,” he said.


He too commented on the race ahead to the finish. “For myself, I am so happy to be back on the boat after my back injury. It is good to be able to push hard again with the team and now the last race is going to be extremely interesting. It is all down to this last leg now.


“I think we are going to fight 200 or 300 per cent. Over the whole race we have not won a leg and now it is time to get that win - win that last leg and win the whole race,” he added.


The final word goes to bowman Jack Bouttell. “I think we have come this far, we have been working on this project since January 2017 now and we are in a position to win,” he said. “We seem to be making life harder and harder for ourselves but it is all to play for, we don’t have to worry about the rest of the fleet at all and we just have to finish ahead of Brunel and MAPFRE and then we win, it is as simple as that.


“It is hard because the final stage is a short leg, so it is a bit of a lottery at times but I think we can do it for sure. We need to maximize the time we have here to iron out a few weaknesses and work from there,” Bouttell added.


Dongfeng Race Team will next be in action at the Gothenburg In-Port Race starting at 12.00UTC on Sunday. The start of Leg 11 is at 12.00UTC on Thursday June 21st with the finish expected in The Hague on June 24th.