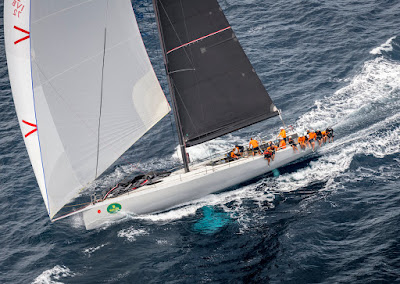 Dieter Shon’s Maxi 72 Momo has won the Challenge Rolex Trophy, awarded to the yacht coming first overall in the IRC class. With a compensated time of 24h21m44s, the very fast Maxi 72 scored its second big result in the Rolex Giraglia. The Russian ClubSwan 50 Skorpios, first In the ORC Class.   A winner in real time last year, in an edition with very light winds, the Maxi 72 Momo represents the first definite result of Rolex Giraglia number 66.


Maybe it was the tactical calls of Luna Rossa skipper Francesco de Angelis, on board with Michele Ivaldi, Matteo Auguadro and Romolo Ranieri, to name just the national champions, but the fast Maxi managed to hold onto first place by a few minutes in front of the other Maxi 72 Dario Ferrari’s Cannonball and Alex Schaerer’s Caol Ila.

The classification is also certain for the first positions of the ORC Class, with Andrey Konogorov’s ClubSwan 50 Skorpios which won the The Challenge Nucci Novi Trophy in the ORC Class. Light winds for the smaller – and slower - boats arriving during the day at the headquarters of the Yacht Club Italiano and many others on the way during the last night of racing.


So the classifications are still open, and in the Duca degli Abruzzi harbour the yachts have time until 11 o’clock tomorrow morning to finish the race. The award ceremony will be held at midday tomorrow in the racing village in front of the YCI headquarters, where the welcoming service has been in operation without interruption from the morning of June 14.