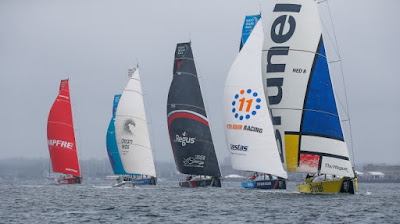 Bouwe Bekking’s Team Brunel sailed a perfect race on Saturday afternoon, winning the start, edging into a lead and extending away for a convincing victory in the Gurney’s Resorts In Port Race Newport.   “We knew the start was going to be critical,” said Brunel’s helmsman Peter Burling after the race. “We came off the line in good shape and were able to sail clean the rest of the race and that made our life pretty easy…


“It’s nice to take the win and great to have a bit of momentum. We’ve put together a few really good results in row now and we’re hoping to come home really strong. We have a great bunch of sailors on board and we’re really enjoying our yachting and looking forward to pushing this boat as hard as we can.”
A second place finish by MAPFRE allowed the In Port Race Series leader to extend its advantage further. It was another impressive come from behind performance by skipper Xabi Fernández and his team, who were in fifth place early in the race, before making several passes on the second long leg of the race.
Local hero Charlie Enright led his Vestas 11th Hour Racing team to a strong third place podium finish, pleasing the home crowd who came out in force despite cool temperatures and overcast, wet conditions.
David Witt’s SHK/Scallywag nailed down fourth place, ahead of Dongfeng Race Team who made a late charge but couldn’t complete the pass before the finish line.
Meanwhile, team AkzoNobel were able to overhaul Turn the Tide on Plastic on the first lap of the race course to claim sixth place.
Leg 9 of the Volvo Ocean Race is scheduled to start at 1400 local time (1800 UTC) on Sunday afternoon.
A quick start is predicted with winds near 20 knots in the forecast. Leg 9 is a 3,300 nautical mile transatlantic race to Cardiff, Wales, and the final double-point scoring leg in the race.