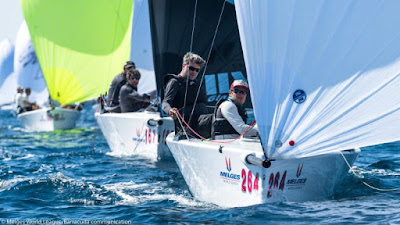 Marina di Scarlino, Italy (May 25, 2018) - All the big names and expected challengers of the Melges 20 International Class occupy the top half of the general classification, after three races hosted by Marina di Scarlino. Reigning World Champion, American Drew Freides at the helm of PACIFIC YANKEE is officially in charge of the event with British Olympic Medallist Paul Goodison on board as tactician, and Charlie Smythe as crew.
This is Freides' first appointment of the 2018 season on the European circuit. At the end of a very solid day, he confirmed his leadership by collecting two victories and a fifth place finish in Race Three, all thanks to a very apparent speed advantage in the challenging light air conditions.
"We are very satisfied with our debut in Europe where we have chosen to race and compete with the best in an extremely competitive fleet, which allows us to grow regatta after regatta," said Freides. "These first results for us are positive and give us a little more certainty that we are on the right track. We still have to stay on top of everything because you cannot discount the competition, especially in this fleet. Even today, we have all seen that it is not easy to stay ahead. Marina di Scarlino is a very complex race course, so the next few races will be useful in understanding what else we need to do to stay ahead of the competition - at this event and for the rest of the season."
Having a fantastic opening day in Scarlino, in second overall is Poland's Krzysztof Krempec racing MAG TINY with tactician Tomislav Basic. With a daily scoreline of 4-2-4, he managed to keep pace with Freides which effectively keeps him in the running for the big trophy.
Re-emphasizing his strength and consistency, Forio d'Ischia Champion Filippo Pacinotti on BRONTOLO is seated in third with Manu Weiller as tactician.
Rounding out the top five includes two other high-profile and not-to-be-under-estimated Italian entries - Marco Franchini aboard MEZZALUNA in fourth (Sandro Montefusco, tactician) and Carlo Alberini's CALVI NETWORK in fifth (Karlo Hmeljak, tactician).
Six teams qualified for Corinthian, all-amatuer team competition with a broad range of representation from Russia, Switzerland, Sweden and Italy. Rising to the top is Marco Giannini's SIDERVAL seated number one in the Corinthian Division, and tenth overall. With a phenomenal third place finish in Race One and an eighth in Race Three, his 29th in Race Two only reinforces the value of consistency in performance. Marina Kaverzina's MARUSSIA is running in second, followed by Alexander Mikhaylik's ALEX TEAM in third.
The Melges World League is supported by Helly Hansen, Garmin Marine, North Sails, Toremar, Lavazza, and Melges Europe in collaboration with Club Nautico Scarlino, Rigoni di Asiago, Resort Baia Scarlino and Scarlino Yacht Service.
Melges World League has signed and adopts the code of ethics of the Charta Smerarlda strongly promoting the values of One Ocean Foundation.
MEDIA AND RACING COVERAGE
As with other Melges 20 events around the world, racing updates will be posted online at the Official Melges 20 Facebook Page. Be sure to also follow the fleet on Instagram, Twitter and YouTube. Tune in for the latest racing information, results, video interviews and photos at melges20.com.
TOP FIVE RESULTS (PRELIMINARY - After Three Races)
1.) (USA) Drew Freides, PACIFIC YANKEE; 1-1-5 = 7
2.) (POL) Krzysztof Krempec, MAG TINY; 4-2-4 = 10
3.) (ITA) Filippo Pacinotti, BRONTOLO; 9-5-2 = 16
4.) (ITA) Marco Franchini, MEZZALUNA; 6-4-11 = 21
5.) (ITA) Carlo Alberini, CALVI NETWORK; 5-3-15 = 23
View Full Results