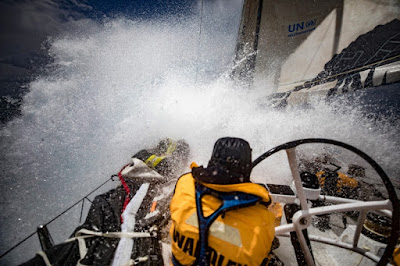 The Volvo Ocean Race will live stream on Twitter the eight remaining In-Port Races from the 2017-18 edition, beginning on Saturday 27 January in Hong Kong.  Fans from all around the world will be able to watch the exciting live races and join the real-time conversation via @volvooceanrace on Twitter.  In addition to the live In-Port Races, @volvooceanrace will also broadcast premium video content from the seven participating boats.


The collaboration sees the 83,000 kilometre ocean race – dubbed the toughest test of a team in professional sport – further expand its digital presence, and means that fans on Twitter can look forward to a mix of live action, expert analysis and best-of highlights. Partnering with Twitter is the latest in a series of evolutions which have seen the four-decade old event put digital at the forefront of its storytelling strategy.   In May 2015, the Volvo Ocean Race broadcasted live from the field of play using Periscope, Twitter’s live streaming video app.

Jordi Neves, Chief Digital Officer at Volvo Ocean Race, said: “Twitter is a natural home for the Volvo Ocean Race’s live action and ever-changing story, and we’re excited to partner and work closely with the platform to give our fans a more connected experience than ever before in 2017-18.”   Simone Tomassetti, Head of Sports Partnerships, Southern Europe at Twitter, said: “Twitter is what's happening. Now all the Volvo Ocean Race fans will be able to see and experience the best live and on demand video from the race right in their timelines”.

Real-time, sailor-generated, content
The introduction of a ground-breaking Crew Communicator device means that for the first time in the Volvo Ocean Race’s history, sailors can send tweets live from the boat, even as they race through the most remote regions on Earth – staying connected via satellites in geo-stationary orbit some 36,000 km in space. Previously, access to the internet has been prohibited in order to prevent teams receiving information from shore.

Additionally, the Volvo Ocean Race has launched dedicated Spanish - @volvooceanraceE- and French - @volvooceanraceF- Twitter accounts in order to give fans around the world a more tailored and accessible experience in 2017-18.  The 2017-18 edition of the event started on 22 October 2017 in Alicante, calling at Lisbon, Cape Town and Melbourne, and will visit a further eight iconic Host Cities including Hong Kong, Guangzhou, Auckland, Itajaí, Newport (USA), Cardiff and Gothenburg, before a big finish in The Hague in summer 2018.