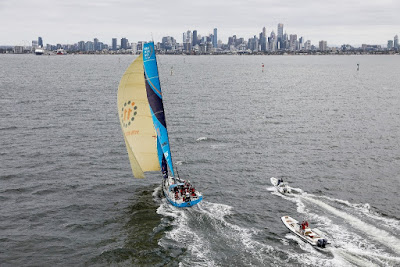 Close racing from beginning to end of Leg 3 challenged the crew of Vestas 11th Hour Racing since departing December 10th from Cape Town, South Africa and finishing on Christmas Day in Melbourne, Australia. The sailors clenched another podium finishing in third place at 8:52 Local Time or 21:52:11 UTC.


This was a double points leg so Vestas 11th Hour Racing earns 10 points which now puts the team in third place overall just 7 points from the lead.
“It was a tough leg, both physically and mentally,” said team co-founder Mark Towill (USA) upon finishing.”We are happy to be on the podium again and happy to be on land for Christmas.”
After struggling for the first few days out of Cape Town - starting in 30 knots of upwind conditions then transitioning into lighter, shifty wind - they caught up with the fleet after taking a different northerly route and sailing a more favorable angle to get south by Day 4.
From there, the team sailed into the Southern Ocean in third place and held that position for the thousands of miles of gybing along the Antarctic Ice Exclusion Zone - or “ice gates” - the southern boundary the Race Control has forbidden the yachts from crossing to prevent close proximity to known icebergs.
“We saw ice that was hundreds of thousands years old when we were at the University of Cambridge last summer learning from the British Antarctic Survey,” said rookie sailor, Jena Mai Hansen (DEN), “but I would like to keep it so that is the only ice we see in this race."
Anticipation followed by the reality of strong winds and big seas pushed the sailors to their physical and mental limits.  For days on end, the sailors faced winds in excess of 40 knots and a large sea state the southern ocean is notorious known for.
“We are sending it down mountainous waves. That is not an exaggeration. They look like something out of another world,” said onboard reporter Sam Greenfield (USA) on Day 5.
Sailing as far south as possible affords the team the ability to travel the shortest distance to Melbourne, but the wind direction from astern means the trade off is to constantly gybe in order to stay close to the ice gate.
"When it's really windy like this, maneuvers are really expensive," said skipper Charlie Enright. "When you know it's the right thing to do, but the right thing to do takes two hours and 100% of everybody's effort, sometimes it's hard to reach that conclusion. Lucky for us we bit the bullet and have stayed in touch with the group."
The highest recorded gust on the blue boat was 50 knots and the top recorded boat speed was 38 knots. The crew did an excess of 30 gybes, once 10 in just 19 hours, and saw as low as an air temp of 9ºC and a water temp of 9°C.
“Cold. Tired. Stiff. Gybe after gybe after gybe. Grinding along the ice gate has turned us into a boat of the gybing dead,” commented Greenfield halfway through the leg.
By Day 11, they passed the last ice gate and turned north for Melbourne. From there, the estimates looked like a Christmas arrival and the motivation of the sailors was evident.
"It's really nice to finally be free of the ice gates," said Simon Fisher (UK), navigator onboard. "Now we're looking forward to some fast sailing and getting warm.”
No one was more happy than the two Australian sailors onboard, Stacey Jackson and Tom Johnson.
“I really hope someone is waiting for me on the dock with a sausage with tomato sauce or a vegemite sandwich” said Jackson just 48 hours before finishing.
“I’m super excited about getting to Melbourne to see my family,” added Tom. “The only thing on everybody’s mind right now is going fast.”
In the last push, the team opted to go into Stealth Mode hiding their position reports from their fellow competitors. The leading boats MAPFRE and Dongfeng opted to turn north sooner than Vestas 11th Hour Racing and the close 4th place boat, Brunel. When the Stealth Mode was over, the team was sailing just 11 miles ahead of Brunel and closing the gap on Dongfeng.
It was the last stretch in the harbor in Melbourne that really pushed the sailors mentally. With warm shower and a cold beer practically within sight, it was just a narrow channel full of ripping currents between them and docking.
The sailors are now off to recover for a few days before ProAm sailing on December 30th and the start of Leg 4 to Hong Kong on January 2nd, 2018 where they will be joined by #Take3fortheSea founder, Tim Silverwood. The organization focused on keeping our oceans clean will receive a grant from 11th Hour Racing to continue their efforts and to highlight the team’s legacy project as they travel around the world with the Volvo Ocean Race.