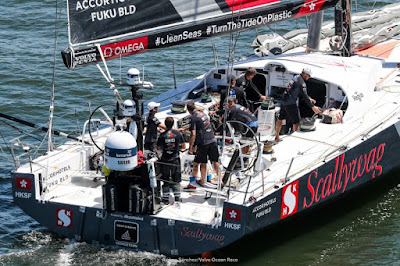 Fifth place in Leg 3 of the Volvo Ocean Race went to Sun Hung Kai/Scallywag who managed to hold off Turn the Tide on Plastic, for the second consecutive leg.  Skipper David Witt steered Scallywag across the Melbourne finish line on a sunny boxing day, just in time for lunch. Turn the Tide on Plastic was less than three hours behind, after over two weeks and 6,500 nautical miles of close, hard-fought racing.

“Aussies arriving home after a tough leg. 6th place - shame we couldn't catch those Scally's. We tried and it was close. Hopefully next time,” tweeted Turn the Tide on Plastic skipper Dee Caffari as her boat approached the finish line.
Leg 3 of the Volvo Ocean Race represented a return to the roots of the race – a dip down to the Roaring Forties of the Southern Ocean, where storm systems circle Antarctica, unimpeded by land. The result is day after day of cold, strong winds and fearsome seas.
“The Southern Ocean always turns it on,” said Scallywag’s Luke Parkinson as the boat pulled up to the dock. “There are big waves and a lot of wind. This time we probably spent more time further south with day after day of big wind. It certainly can wear you down.
“When we turned left and headed up to Australia it was pretty special - a very good feeling. We’ve got to rest up now and be ready to leave in a few days.”
It’s an abbreviated stopover in Melbourne, with restrictions on how much work the crews are allowed to do on the boats, ahead of the start of Leg 4, to Hong Kong, on January 2, 2018.
One boat remains at sea; team AkzoNobel, who had just under 300 miles to go on the 0700 UTC position report on December 26.
The Spanish MAPFRE team won Leg 3 of the Volvo Ocean Race, arriving into Melbourne in time for Christmas. It was the second consecutive leg win for overall race leaders.