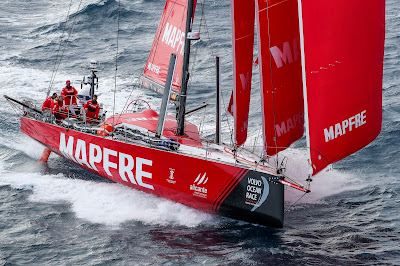 The Spanish Volvo Ocean Race team MAPFRE has won Leg 3 from Cape Town, South Africa to Melbourne, Australia, a 6,500 nautical mile dive into the fierce challenges posed by the Southern Ocean.   For the second consecutive leg, MAPFRE needed to come from behind to earn the victory. And for the second time in a row, it was Dongfeng Race Team they passed mid-stage, to snatch the win.

“We had to fight very hard for this victory,” skipper Xabi Fernández said moments after crossing the finish line. “There’s so much of the race to go. But for now it’s looking good and we’re very happy of course.”
The Southern Ocean pushed the teams to the limit. Extreme cold, storm force winds for days on end and towering seas posed massive seamanship challenges, let alone allowing for racing and tactics.
But of all the teams on Leg 3, MAPFRE had the highest work rate in terms of manoeuvres, which allowed them to stay in more favourable conditions for longer than their opposition. It was a powerful statement by a very strong crew.
“The strongest point for this team is the group of people we have,” Fernandez acknowledged. “They are so good and give us so much and have been working so hard on this leg. It was so tough, but it’s all gone perfect. Now we have a few days for recovery and we can get ready for the next one.”
MAPFRE started Leg 3 already atop the leaderboard, with a one point lead over Leg 1 winner Vestas 11th Hour Racing. But as this first Southern Ocean challenge is worth double points, the team will now open up a more comfortable margin – at least six points – depending on the finishing position of the chasing boats.
Dongfeng Race Team is currently in second place, trying to nurse home a boat with a damaged keel system. But at 1630 UTC, Charles Caudrelier’s team had 45 miles to go with a 30 mile lead over Vestas 11th Hour Racing who in turn were fighting off a late charge by Team Brunel, a further 20 miles adrift.