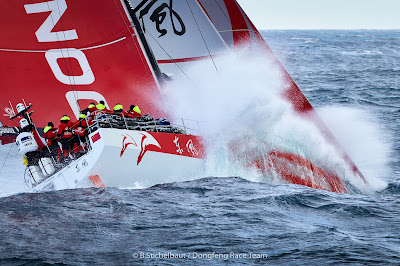 Dongfeng Race Team, which currently lies second overall in the Volvo Ocean Race, has today announced that it is calling up the highly talented Swiss female sailor Justine Mettraux for Leg 4 from Melbourne to Hong Kong.    The selection of Mettraux is part of a planned rotation of crew in the Dongfeng Race Team squad with French sailor Marie Riou taking a break for this leg. Riou, a four-time Nacra 17 world champion, who sails as a trimmer and grinder on Dongfeng, will return to the team for Leg 5 from Hong Kong to Auckland.

Also returning to the crew for this leg is Kiwi mainsheet trimmer and watch captain Daryl Wislang who has made a good recovery from a back injury, French Vendee Globe star Jeremie Beyou, who was rested on Leg 3 and now replaces Stu Bannatyne, and Chinese sailor Chen Jinhao/Horace who is back in place of Xue Liu/Black.

Mettraux, aged 31 from Geneva but now based in the French Brittany port of Lorient, has a formidable sailing record. She came second in the Mini-Transat in 2013, the best finish in that race for a female sailor, and last year she finished seventh in the Solitaire du Figaro. Earlier this year, alongside Bertrand Delesne, she finished fourth in the Class40 fleet in the Transat Jacques Vabre.

The tough Swiss sailor was a natural choice for Dongfeng skipper Charles Caudrelier because, alongside her solo racing, she was also a key crew member with the all-female Volvo Ocean Race entry, Team SCA, in the 2014-15 race.

“We wanted someone as tough and competitive as Marie and Justine was the obvious choice,” said Caudrelier. “She is very experienced as a solo racer but also has the Team SCA background. She knows several of our sailors well so I have no doubt that she will settle in quickly during the leg to Hong Kong.”

“Marie wanted to have a break during the race which I think is clever because the Volvo is very long and very tiring, so I am giving her a break on this leg and hopefully she can have a good rest and come back in really good shape,” she added.

The opportunity to race with Dongfeng Race Team comes at the perfect time for Mettraux who has just finished the Transat Jacques Vabre and whose Figaro boat is currently in re-fit.

On Dongfeng she will sail – as she did on Team SCA – as a headsail trimmer and she is looking forward to racing with some familiar faces. “I know Carolijn Brouwer well,” she said. “We sailed together on SCA and I really enjoyed sailing with her. I also know Kevin Escoffier, who is a good friend, and Fabien Delahaye who has worked with me on routing in my Figaro campaign.”

Brouwer said she will be sad not see Riou on board for Leg 4 but is delighted to be sailing with Mettraux again. “I am more than confident that Justine is going to fit in really well in this team,” she said. “We did a lot of sailing together with SCA – she is a really, really talented sailor and she showed that during the SCA campaign when she became an extremely good trimmer and a very organised one too, which is also important.”

Mettraux has been watching how Dongfeng Race Team has been getting on and knows that Leg 4 – like the previous three – is likely to see a continuation of Dongfeng’s epic battle with MAPFRE.

“They have managed to go really fast so I will be really interested to see how they do that and how they manage to get that speed,” said Mettraux. “And yes, there is a little bit of a battle going on with MAPFRE and I think it will continue until the end of the race. I hope that we will be able to stay in front of them on Leg 4, but it is going to be an interesting contest to follow for the rest of the race.”

Bruno Dubois, the Dongfeng Race Team director, commented on the crew change. “The Volvo Ocean Race requires an outstanding long-term effort by everyone on the team and especially the sailing team. It was always in our plans to rotate some of our crew to ensure we get the best out of a hugely talented sailing squad. We are delighted to have someone as competitive and experienced as Justine for the next leg and to welcome back Daryl, Jeremie and Horace.”
Justine Mettraux
Born on 4th October 1986 in Geneva, Switzerland
Sailing highlights include:
2013: 3rd in the Mini Transat 6.50
2014-15: 6th place Volvo Ocean Race with Team SCA
2017: 7th in La Solitaire du Figaro with Team Work
2017: 4th in the Transat Jacques Vabre Class 40 with B Delesne on Team Work