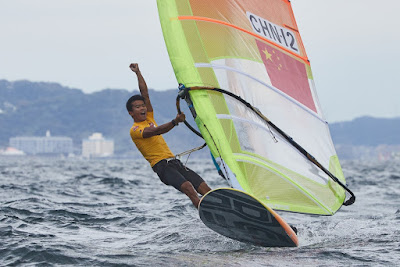 In both the Women's and Men's competition there was a little clarity at the start of the day as to whom would be taking medals away, the only thing that was to be decided was as to which color medal sailors would take home.

2017 has seen a year of experimentation with regards to final day format of racing - with the RS:X Class trying out a wide range of different formats over its events this year.

For this World Championships, the RS:X Class opted to go back to the more traditional "medal race" format where the top ten boards go into a final, double points showdown.

The results going into this medal race for both the men and the women had some clear leaders who were guaranteed a medal but the points were such that there could be some surprises in store for the competitors as well as some outside opportunities to make the podium.

So, with wind speeds gusting up to 20 knots from the north, the Race Committee took the option of setting a course with a reaching start rather than the more conventional upwind start.

This would mean that, if timed right, sailors could be hitting the start line at speeds in excess of 20 knots which would make for a thrilling dash to the first turning mark before turning downwind for the first of two laps.

It was the women who would open proceedings for the day. All eyes were on the Chinese sailors to see whether their superior sailing skills and fitness would hold out now the breeze was up.

At the start, all boards were up to full speed with all of the boards pretty grouped together. It was Chinas Jiahui Wu who powered her way to the front and led at the first mark. In stark contrast, Peina Chen (China) was languishing at the back of the fleet at struggled for speed on the fast reach.

On the first downwind leg, Chen found a bit of a better wind and lane and managed to pass a couple of boards to get back into Gold medal position - the maths being that she needed to finish 9th or better to secure Gold.

Wu led around the first lap and at the top of the second lap, it looked like it was only Poland's Zofia Klepacka who could stop the Chinese from taking all the medals. Klepacka was just doing enough to hold off Hongmei Shi (China) who was not enjoying the conditions and was in 10th place.

At the final turning mark, Wu made an error and it was Manjia Zheng (China) who squeezed in for the race win. Wu came in second followed by Russian Stefania Elfutina and then Klepacka. Looking back, Klepacka's hands on the bronze medal rested on the finishing position of Yunxiu Lu (China).

Lu crossed the line in sixth place, picking up 12 points which was just enough to deny Klepacka a World Championship medal and ensure that China had a sailor on every level of the podium. Chen crossed in 9th place, doing just enough to secure the gold medal with Wu and Lu claiming silver and bronze respectively.

In the Under 21 division, Elfutina had earnt herself the Gold yesterday by securing her ticket in the medal race. Behind her the race would continue as the remaining gold fleet took to the water.

Xianting Huang (China) did enough to pick up silver and Berenice Mege (France) had a close battle with Great Britain's Emma Wilson to collect the bronze medal.

Some battles in the U21 division will be picked up again as some of those sailors will attend the World Sailing Youth World Championships in Sanya, China in December.

In the men's fleet, gold and silver were going to go to China and Switzerland - the only thing that was unknown was who would take home each medal. China's Bing Ye had more race wins than Switzerland's Mateo Sanz Lanz but both were tied on 33 points going into the day.

Before the race, Sanz Lanz commented, "I will try to sail my own race and keep going fast and see what happens".

At the start is was Frenchman Louis Giard who timed his run to absolute perfection, hitting the line at full speed and at the exact second the gun went to lead the fleet to the turning mark. Giard, who had such a promising qualifying series but picked up some big scores in the final series had a point to prove and put the hammer down the first run.

Dutchman Dorian Van Rijsselberghe also had a point to prove and had been hoping for these conditions all week - Van Rijsselberghe overtaking Giard down the run and led around the bottom mark and would continue to lead for the rest of the race to take the race win.

Behind him the racing was tense. Sanz Lanz had the better of Ye and was leading up the first lap to round the top mark in 8th place with Ye in last place. Israel's Shahar Zubari was doing just enough at this point by rounding in fourth to get into third place overall and push another Chinese sailor, Mengfan Gao, off the podium.

Down the run and up the second lap, the shifting and gusty winds would shuffle things up. Sanz Lanz approaching the top mark from the left-hand side was being knocked down the pack and with Ye coming in from the right, Ye managed to sneak ahead of Sanz Lanz and would just need to hold the Swiss off down the run to secure Gold.

Ye did enough and finished in 9th place with Sanz Lanz in 10th, gold going to Ye and silver to Sanz Lanz.

The battle for bronze was extremely tight and it was Zubari's fifth place that would hand the medal to Gao by just one point - disappointment for Zubari for this event but he will be pleased overall given his injuries this year.

In the Under 21 division, Gold went to Angel Granda Roque (Spain) with silver secured by Mestre Adrien (France) and bronze by Ofek Elimeleh (Israel).

So, with six podium spots available, China take 5 places losing only the silver medal in the men's fleet - and offered a masterclass to the rest of the RS:X fleet.

2017 is early in the Olympic cycle to be setting such markers but it certainly will make other countries sit up and take note that they have a lot of work to do if they are going to take back some medals over the next three years.

The next major event for RS:X sailors will be the Sailing World Cup which takes place in two weeks' time, just down the coast at Gamagori where all the Olympic Classes will compete in the first event of the 2017/18 Sailing World Cup Series.
(www.sailing.org)