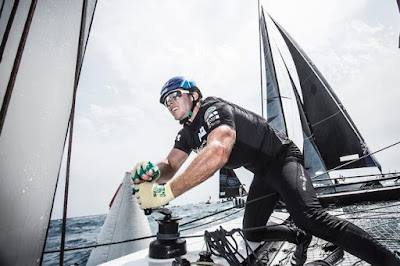 However Phil Robertson's Omani-flagged team sealed fourth-round victory in style, sailing a flawless race to cross the line with a mammoth lead of more than two minutes over closest rivals SAP Extreme Sailing Team.
The crowds lining the shore could hear the cheers coming from Oman Air's GC32 as the team, last year's runners up, celebrated topping the podium for the first time this season following a trio of thirds in the previous Acts.
Three wins in six races saw Austria's Red Bull Sailing Team claim the second podium spot, finishing just six points behind Oman Air, while second in the final race was enough to secure third for the Danish crew of SAP Extreme Sailing Team.
Alinghi's hopes of a podium finish were quashed when they finished seventh in the final race, forcing the Swiss syndicate to settle for fourth place.
It is the first time the team, co-skippered by Arnaud Psarofaghis, has missed the podium this season following a win in Qingdao and runners-up spots in Muscat and Madeira Islands.
Crucially the results see SAP Extreme Sailing Team move to the top of the overall leaderboard at the halfway mark of the Extreme Sailing Series, tied on 43 points with Alinghi, while Oman Air in third reduce the gap to the leaders to just one point.
"We probably couldn't have finished in a better way to be honest," a grinning Oman Air skipper Robertson said. "It was a tough day out here and pretty tricky conditions - pretty light, lumpy and shifty as well. The key again was the starts. When the pressure was on, we delivered."
Despite moving to the top of the overall standings, SAP Extreme Sailing Team helmsman Adam Minoprio said it was too soon in the season to start celebrating.
"It's been a tough week for SAP Extreme Sailing Team, and thankfully we did just enough to scrape the podium," he said. "Yes we're at the top of the overall leaderboard but we're only just at the halfway mark of the Series - there's plenty of racing still to come."
NZ Extreme Sailing Team finished fifth ahead of Land Rover BAR Academy in sixth. Wildcard crews FNOB Impulse and Team Extreme took seventh and eighth.
Despite not threatening the more seasoned Extreme Sailing Series teams, young FNOB Impulse skipper Jordi Xammar said the experience of competing in the 'flying' GC32 was unforgettable.
"It was amazing - we can be very proud of what we did out there," Xammar said. "It's been an opportunity we will never forget."
Barcelona's debut in the Extreme Sailing Series proved an overriding success, with 22 thrilling races held on the azure waters off the city's Barceloneta beach in near-perfect conditions.
It was the ideal way to kick start an alliance with Host Venue Partner Fundación Navegación Oceánica de Barcelona (FNOB) that will see the Extreme Sailing Series return to Barcelona for another three years.
In the Flying Phantom Series, which was held prior to GC32 racing, the Austrian crew of Red Bull Sailing Team saw off French teams Cup Legend and Solidaires en Peloton to take the regatta win.
The battle for the Extreme Sailing Series top spot will recommence in Hamburg, Germany, from August 10 to 13, before the global Stadium Racing tour heads to Cardiff, UK, from August 25 to 28.