Vendée Globe - Ruyant’s race against time to beat the weather 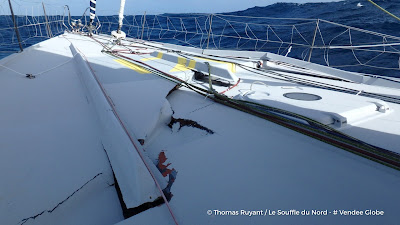 Vendée Globe solo skipper Thomas Ruyant is edging towards South Island New Zealand and, ideally, the sanctuary of Bluff with as much urgency has he dare, nursing his broken IMOCA Le Souffle du Nord pour le Projet Imagine, which threatens to break in two after he hit a large, hard object on Sunday late afternoon.     The young skipper from the north east of France was motor sailing at around 7.5 to 7.8kts trying to reach the shelter of the South Island coast before another big stormy low pressure arrives in the middle of Tuesday.


At 1500hrs TU this Monday afternoon Ruyant had about 205 miles to make to Bluff, the most southerly town in New Zealand. Race Direction of the Vendée Globe is in constant contact with his team and the local MRCC – the Wellington based RCCNZ – with an evacuation plan ready to be actioned if required, and track the progress of Ruyant and his wounded IMOCA every six minutes.

Ruyant sent video footage of the damage sustained when he hit what he believes to be a shipping container when he was sailing at around 17kts. It clearly shows vertical open cracks down to below the waterline on the port side especially, cracking in the deck and water inside the boat. He spent several hours hove to (stopped) during Sunday night into Monday. He told Vendée LIVE today:

“The damage at the front of the boat is spreading. The hull is opening up and the frame coming away more, everywhere. I’m sailing to the south of New Zealand. I’m not sure if it will all stay in one piece until then. What’s good is that I’m in helicopter range, which is reassuring. The inside hasn’t been affected and with my watertight doors, I’m safe. The shock was exceptionally violent. It gives me the shivers just thinking about it. I was at 17-18 knots and came to a sudden standstill hitting what was probably a container seeing the damage it has done to the hull. The whole of the forward section exploded and folded up. Luckily the boat was not dismasted. It was really very violent. I was sleeping on my beanbag and fortunately I had my head down in that, as I ended up hitting the mast bulkhead. I found things that were stowed in the stern right up against the forward bulkhead. They got thrown 10m forward.”

Ruyant’s collision with an unidentified floating object represents the fifth time that a Vendée Globe competitor has struck something and been forced out of the race as a consequence in this edition. Vincent Riou, Morgan Lagraviere, Kito de Pavant and Bertrand de Broc have all abandoned this race due to damage sustained by semi-submerged objects of some kind. De Pavant had to abandon his yacht which is subsequently believed to have capsized following the loss of its keel. And Alex Thomson, who lies in second place on Hugo Boss, has his chances currently compromised by the loss of a foil sustained when it hit something 13 days after the start.

Race leader Armel Le Cléac’h is now over 500 miles ahead of Alex Thomson, escaping on to a different weather system from the British skipper. An initial difference of 15 or so miles has proven critical to the continued advance of the Breton sailor who has twice finished second in successive Vendée Globe race. Le Cléac’h is expected to bring his Banque Populaire VIII round Cape Horn between in the early hours of 23rd of December, probably becoming the first Vendée Globe skipper ever to round in December, and Thomson around 48 hours later.

Correspondingly Thomson looks likely to be the first Vendée Globe skipper to round on Christmas Day. Armel Le Cléac’h: “Conditions are rather unstable. I’m on the back of the low and the wind is going from 17 to 30 knots. The seas are heavy. They aren’t the right conditions for being fast, but I am making headway. We’re going to have to watch how things change before the Horn. I asked Father Christmas if I could lead the way around Cape Horn. We’ll see…”

Enda O’Coineen has been forced into a back to basic approach to navigation and routing on Kilcullen Voyager in 17th place. He lost two places when he took time out routing to the north to avoid the worst of the hard weather after being knocked down for five minutes. The Irish skipper reports that he now has no useful computer output after his main computer screen was damaged by water. He has a problem with the configuring of his back up computer which, it is understood, will not boot up. And so he has resorted to GPS fixes and paper charts.

“I am sailing in the dark to a certain extent. What I did to recuperate was to sail north towards Perth. I thought it would be a nice place for Christmas. I changed my mind. I effectively stopped for two days. But yesterday I got myself a little bit back together and I headed and south and east and now I am going east,” O’Coineen said today, adding “Spirits are good right now. You go through highs and low points, in the day, in the cycle and over the week. I have certainly had a couple of tough days and have had a lot of damage. Our shore team are trying to find a solution.”

Yann Eliès was in a positive frame of mind today aboard his Quéguiner-Leucémie Espoir, holding sixth behind Jean-Pierre Dick and ahead of Jean Le Cam. At eight years to the day since he was rescued after breaking his leg 1000 miles south of Australia, Eliès sent a timely message to his rescuers: “I was surprised to get a little video from the doctor and captain of the frigate that came to rescue me south of Australia eight years ago. Thanks lads for coming to get me. I can't remember whether I actually managed to thank you face to face eight years ago. Eight years on and I'm down to the south of Australia again. But this time I have gone by. My passion for sailing is still the same. The next time you're in France, I'll show you around the boat and try to explain why we are so keen to do this race. Once again, lads, thanks!”

Paul Meilhat (SMA): “I got close to the exclusion zone and the southerly wind is freezing. Conditions have improved since the low went over the day before yesterday. We’re on a long tack with the wind on the beam and it’s quite lively. The wind is going from ten to thirty knots, before stabilising at 20-25 knots, which finally allowed Maître CoQ and us to step up the pace. Conditions aren’t what we were expecting in this part of the world, but I prefer this to fifty knots. I hope the three chasing boats won’t get too close. I heard about Stéphane’s dismasting and the damage Thomas has had. I hope they both get safely to port.”

Yann Eliès (Quéginer Leucémie Espoir): The important thing is we can try to narrow the gap to the two ahead of us. That way, the fight will be on for third place. It hasn’t been easy checking everything on the boat with the conditions we have been through. It’s not the best time to go up on the bow. But overall everything looks fine. I’m sorry for Thomas. I spoke to him last night. The photos of his boat are impressive. What’s really sickening is he hit a UFO. There have been five cases or so of sailors hitting something. You could split your head open if you are inside at the nav desk or hit the bulkhead. He was lucky to be on his beanbag. It must have been an incredible shock. As for the dismasting, it’s always a case of not knowing why. After that there is the logistical problem. Thomas will end up in New Zealand, but what’s he going to able to do with his boat?”

Enda O’Coineen (IRL) Kilcullen Voyager-Team Ireland: “The past three or four days have not been good. Like everyone else in this part of the fleet we experienced two bad blows one after the other, I recorded up to 50kts at one stage. The first storm was bad and then about ten hours later the second one and during it I took a very bad knock down and the boat was on her side for about five minutes. When I hear about some of the other competitors I know I am not on my own. I am devastated for some, I don’t want to hear about boats running into things. You never know what is going to happen, it is in the lap of the gods. I will say a few prayers at Christmas.”

Alan ROURA, (La Fabrique): “I have two or three little problems with my sails, so I’m sailing with three reefs and the staysail. It’s frustrating to be like that in this fine weather. I can’t get my mainsail to second reef and for the moment, I can’t climb the mast. I’ll probably go up tomorrow, when conditions are likely to be more favourable. It will only take a quarter of an hour, but it’s a long way up there. I’m finding it hard to come to terms with the news concerning Stéphane and Thomas. I hope that they’re not feeling too upset.”

Eric Bellion, (CommeUnSeulHomme): “I’ve really been at one with my boat for 45 days. She is determined to go all the way, so we agree about that I carry out checks every day inside and out. I’m settling into the pace. Although I have always wanted to complete the Vendée Globe, I have been taking each day as it comes for the past 43 days. If I had to return home to France, I’m almost on my way home now anyway even if I haven’t quite finished the first half of the voyage.”

Nandor Fa (Spirit of Hungary): “The whole day we’ve been sailing against violent waves, which weren’t generated by this wind, they are coming from elsewhere. Basically it’s a very bumpy ride, which is topped with occasional KO hits, which we do not like but we endure. My eye was caught on a dark spot at the top of the mainsail, by the end of the top spreader. I quickly reached for my binoculars to see what’s up there. My first thought was to climb up, but among these seas, alone, no.The other choice was to bring down the sail. But I was sailing downwind and didn’t want to stop. Step by step I winched down the main, while we were sailing at 15 knots with the reacher. The fibre structure wasn’t damaged, only the outer protection layer. I washed it carefully with acetone and put a layer of dyneema on it. To bring it down and then up, it took about 3000 spins on the pedestal all together. I’m really happy, but tired.”
(www.vendeeglobe.org)