Vendée Globe - Colman: all on from now on 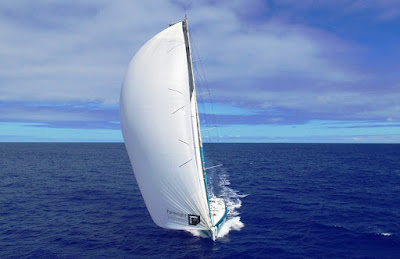 New Zealander Conrad Colman writes this blog from 14th-placed Foresight Natural Energy as he prepares to hop on the express train to the Southern Ocean:  “Not a cloud in the sky, no moon either, the stars burning a trillion holes in the blackness. The Southern Cross shows the way south, stark against the blackness. Yet I am transfixed not by the ageless beauty above but by my local constellation of navigation lights from Fabrice and Kojiro. One hand on the sheets, the other on the winch handle for most of the night but try as I might, Kojiro slipped off the horizon and back into his own little world.

“That was how I spent my night last night, trimming and adjusting the pilot in an effort to squeeze the last fractions of a knot (for the non-sailors, a knot is a nautical mile per hour) out of Foresight Natural Energy, alternately wishing for breeze and then hoping for the best as she drops off an unseen wave to slam violently in the dark like a highly-strung violin dropped onto a hard floor.

“It is both exciting and frustrating to be in such close company with more modern boats that are well sailed. I am sailing the boat at 100 percent of its potential, often 115 percent when its really singing, and yet the newer boats simply slide away, a fraction of a knot becoming one mile and then three. It's also exciting because if, three weeks in, I am only one mile away from clearly faster boats then I must be doing something right! I'm ready to give the next few thousand miles my absolute best so that they're only a mile away after three months!

“To help make that possible I have been crawling through the black carbon corridors in my boat, skinning my knuckles and barking my shins, in order to confirm that we're both ready for the south. I have climbed the mast twice to check and replace important attachment points and yesterday I dove into the water to check the keel, propellor (my main source of energy) and rudder bearings. It's always exciting to dive into such clear blue, knowing that the closest land is three kilometres straight down between my white toes!

“The weather forecast is finally showing a straight path onto the southern expressway and this afternoon we'll be reaching and in the evening we'll be running under spinnaker. We should make to the longitude of Cape Town in four and half days and will get kicked down the road by two depressions during that time so its all on from now on!” (www.vendeeglobe.org)