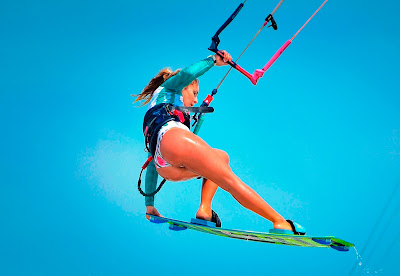 The Womens Big Air had no real surprises, with tour leader Magaji once again showing her ability to boost big and pull off tricks that not many other Women can do. Magaji strolled through to a deserved first place finish with some high jumps and smooth rotations wowing the judges and crowd.   The Womens Freestyle was also no real surprise with round one Brazilian favorite Rosa showing her dominance against the Big Air champion Magaji.


Rosa showed the crowd and judges a graceful display of tricks, including; S-bend to Blind, 313, Backside 313 and Back to Blind, proving she's deserved of the title. It's great to see Womens Freestyle progressing over the last few years and we can be sure that Brazil will continue to deliver world class riders.
The Mens Big Air was intense. Judges had a hard time splitting the difference with what has been dubbed the closest heat of the year. Hoppe, Martinez, Crathern and Burgers all put on a show to be remembered, with a combination of Kiteloops, Handlepasses and Board Off maneuvers getting the crowd on their feet cheering them on.

The Aruban Burgers was exciting to watch with his signature sketchy style, it appeared that at any moment he could have had a season ending crash but he always seemed to narrowly pull off the trick and ride away clean. Crathern gave the crowd a taste of the style he's know for, with big Kiteloop Front Rolls and high Triple Front Rolls and Handle-Passes to round it out. Hoppe got creative with a Kiteloop Boardoff towards the end of the heat really impressing the crowd. Martinez was the crowd favourite though, with his signature crazy style, pulling off triple inverted front flips, Double Handle-Passes and Kiteloops. Once the dust had settled it was Martinez who took the first place, with Hoppe in second and Crathern in third place. The points are now super close between Crathern and Martinez for the overall title it will be interesting to see who takes it out this year.
The Mens Freestyle was a real surprise with the Dominican contest favourites Corniel and Martinez both being eliminated from the competition. Corniel now has no chance to win the world championship whilst Martinez will have to secure a 5th place finish if he wants to take it home.
The Final was a British/ Italian affair with Bridge facing Coccoluto. Coccoluto who just finished the Italian nationals previous to this event was in fine form and looked super hungry for the win. Bridge had a pretty rough start, crashing his first three tricks, making it seem as though his head wasn't really in it. Coccoluto built a strong heat firing off trick after trick, widening his lead over the young Brit. Bridge slowly got some tricks on the board, answering back with similar tricks to Coccoluto but often of a slightly worse execution.

As the clock clicked down it looked like Coccoluto had this one in the bag, attempting one of the best 317s the judges had seen this year. However it wasn't to be as Bridge answered back with a massive Backside 315 of his own getting him the points he needed to narrowly edge out Coccoluto and take home the win for himself. Bridge first, Coccoluto second.
Today was an exciting day of competition; make sure you tune in tomorrow to see how Martinez performs and which riders will take out the World Championship titles here in Beautiful Porto Pollo.
(www.sailing.org)