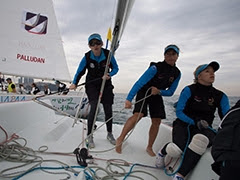 Her Wednesday on the waters outside Haeundae Beach was a bit less gruelling than that, with three straight wins and no losses. Dane Trine Palludan was undefeated before losing her last match of the day to the Aussie team:  "In the light winds it was a long day for three wins, but definitely worth it" Spithill smiles.   "Dynamic Busan" is the slogan for the 1988 Olympic sailing venue, but the Wednesday sailing conditions just outside the beautiful Haeundae Beach unfortunately did not live up to that saying at all.


Although Principal Race Officer Christophe Gaumont managed to get one flight of three matches going, in very light conditions in the morning, only two of them were finished. The third match had to be abandoned as the wind completely died, and a few hours of waiting on a glassy bay followed. Not until after lunchtime could the missing third match finally be re-sailed. After that three more flights were run, still in light conditions, before sunset.
In her first match of the day Katie Spithill and her Team Leagues Racing met Team Ireland Women's Match Racing, led by Diana Kissane. As the Irish skipper was late and stopped by the Aussies from properly entering the prestart, she got her first penalty, followed by one more in a dial-up situation between the two boats. Spithill kept pushing her opponent, forcing Kissane to yet another mistake as she tried to quickly gybe around, but ended up not keeping clear, "With three penalties before the start gun went off, the Irish were black-flagged and we took the match without even racing on the course" Spithill explains.
Spithill's second match against local hero Gyeong Jin Lee of the Busan Sailing Federation was also won quite easily, as the Australian team had a comfortable lead from start to finish. Then they faced previously undefeated Team Ulrikkeholm, with substitute skipper Trine Palludan, "We had to head back below the starting line as we touched it too early, and that mistake gave Spithill three to four boat lengths lead already from the beginning. Then we tried the starboard side of the course, hoping for a favourable wind shift or more pressure, but found neither. Despite a really fast last downwind, where we closed the gap to maybe two boat lengths, we didn't manage to catch her" Palludan describes the race.
Renée Groeneveld and her Matchrace Team Netherlands began the Busan Cup Women's International Match Race with three losses and just one win Tuesday, but improved their score a bit by winning their only Wednesday race, "Yesterday we struggled with material failures and crew work, trying to get used to each other and to the boat. Today we had a better day in the light winds, leading our match over Kissane from start to finish" says Groeneveld.
The round-robin stage of the Busan Cup Women's International Match Race continues Thursday on the beautiful waters outside Haeundae Beach.
Standings after 2nd day of round-robin in the Busan Cup Women's International Match Race, the 4th event of the 2016 WIM Series (name, nationality, wins - losses, winning percentage):
1. Trine Palludan, DEN, 7 - 1, 88 %
2. Stephanie Roble, USA, 4 - 1, 80 %
2. Lucy Macgregor, GBR, 4 - 1, 80 %
4. Katie Spithill, AUS, 6 - 2, 75 %
5. Pauline Courtois, FRA, 5 - 3, 63 %
6. Anna Östling, SWE, 3 - 2, 60 %
6. Claire Leroy, FRA, 3 - 2, 60 %
8. Caroline Sylvan, SWE, 4 - 4, 50 %
9. Renée Groeneveld, NED, 2 - 3, 40 %
9. Diana Kissane, IRL, 1 - 7, 13 %
11. Milly Bennett, AUS, 0 - 5, 0 %
12. Gyeong Jin Lee, KOR, 0 - 8, 0 %