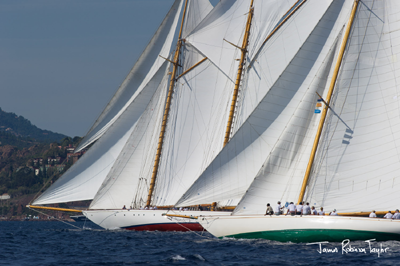 Today was the last day for the Dragon and the 5.5 Metre classes that crowned  their 2016 champions. One-designs, Metre classes and Classics all profited from excellent wind conditions with a good southerly breeze and clear, sunny skies. The 150 boats, all sails hoisted, made a real display of power and colour for the many spectators crowding the beaches and the Croisette. The racing on the one-lap course in the bay of la Napoule was close and intense, bringing out the best from the crews.


The Dragons and the 5.5 Metres finished their 2016 Régates Royales-Trophée Panerai in great style: the good southerly on the race course in the gulf Juan enabled the two fleets to have two and three races respectively. In the 5.5s two out of three wins went to the Dutch crew Feng Shui ,beating Germany's Atari who had a hard time getting untangled from the group. Holland's Jan Pasman, Ron Azier et Kim Chabani were in pole position for the last match, and they did not miss their chance. Feng Shui finished in style the Régates Royales 2016 in the 5.5 Metre class, returning to the Cote d'Azur after many year's absence. The “Flying Dutchmen” ended the day with the third victory out of three races, dominating the overall leaderboard in front of Germany's Atari (Hannes Waimer, Markus Koy, Diego Negri), who also shined getting three second places and the Germans on Prettynama (Max Muller, Jens Maladinsky, Max Steigl) in third.

The Dragon from the mountain
On the eve of the last day, it looked like nothing could stop the Russian crew of Annapurna, even though anything could happen on the race course with around 15 knots of wind and with still two races to go. As a matter of fact skipper Anatoly Loginov and his crew Vadim Startsenko and Alexander Shalagin did not shine today, only scoring a 7th and a 6th, but they profited from equally opaque performances from their competitors. Finland's Thouban (Christian and  Andrea Borenius, Richard Pernici) had their best day so far in the Régates Royales, closing in front of Spain's Gunter (Javier Scherk, Gustavo Lima, Paulo Manso), while Germany's Powwow (Michael Znakel, Charles Nawkin, Pedro Andrade) won the tenth and last race of the series, beating France's Outlaw (Stéphane Baseden, Pascal Rambeau, Patrick Aucour).
So the “Dragon from the mountain” Annapurna proved unbeatable and ended the week with a 15 point advantage on UK's Storm, who showed great consistency throughout the series, and 19 points over the Spanish on Gunter, while the German crew of Smaug, after having been leading for most of the regatta, could not do better than finishing in fourth, in front of the French on Outlaw. The Russians of Even Better (6th) and Melody Nelson (9th) who looked particularly strong in the first races, have not been consistent enough to keep the pace of the leaders.

Fast and Classic
The Classics did not have to wait too long on the water today: the southerly breeze filled in   well before noon and the race committee, after a very short postponement, launched the race on an almost windward/leeward course. Speeds were high and even the Big Boats, that had two laps to cover, got back into port before mid-afternoon. It was an awesome day out on the water, with a flat sea and an excellent breeze of around 15 knots. After a long upwind leg followed by an equally long downwind leg all the boats could get back ashore and get ready for the Panerai crew party at the race village. The huge Elena, more than 50 metres overall, showed all her power and majesty for the joy of the many spectators crowding the beaches of Cannes, hoisting her full sail inventory (more than 1,300 square metres). Still, once again nobody was able to beat Moonbeam IV in corrected time.
The much longed for match of the Twelves turned again into a duel between France and  Sovereign, while Chancegger was not totally at ease in today's breeze. The 12 Metre owned by Claude Perdriel finished more than three minutes before France's challenger to the America's Cup in 1970, 1974 and 1977.
The New York 50 Spartan showed that this design by Nathanaël Herreshoff is not just an extremely good looking boat but also one of the fastest gaffers in the fleet by winning the fourth race of the series, even if she could not dethrone Linnet, the New York 30 owned by Italy's Patrizio Bertelli.
In the Classics division Ganbare, the One Tonner designed by American Doug Peterson, has won yet another race, distancing Sparkman & Stephens' design Arcadia by just a few seconds. The two boats are now separated by a mere point and tomorrow's race will be crucial to crown the winner of the 38th edition of the Régates Royales.
In the Vintage Marconi < 15 metres, Entreprise, the 1977 Sparkman & Stephens design, now has a quite comfortable advantage on Léonore. In the  > 15 metre Marconi class Arrow has confirmed her excellent form  after yesterday's win in corrected time in front of the 8 Metre Carron II. Tomorrow's race will also confirm Freya of Midgard as the winner in the Spirit of Tradition class. And finally in the Tofinou class Pitch took yet another victory, showing her supremacy in all conditions.
Tomorrow's racing will therefore determine and crown the overall winners of this successful 38th edition of the Régates Royales de Cannes.