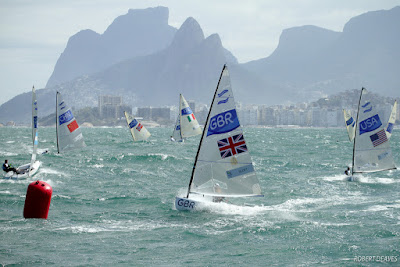 Great venues, great conditions and great winds are the prerequisites for any successful sailing media package and this year the Finn class has benefitted from all three in ample measures at its major championships, culminating with two weeks in magical Rio for the Olympic Games.   With visits to Barcelona, Gaeta, Torbole and Aarhus preceding the Olympic Sailing Competition, the class was not only able to showcase the athleticism of its sailors, but also produce spectacular imagery of the sometimes brutal Finn sailing at the highest level.

This all helped to create the most successful year ever for the class in terms of coverage and reach. The main focus for the year has been on producing quality content for social media channels, especially Facebook and Instagram, and this culminated with a Facebook Reach in excess of 1.8 million people during August, far surpassing targets and realistic expectations.
While the Finn class media platform receives worldwide acclaim, it is still largely limited to traditional journalism and budget-constrained updates through social media and other online activity. However, it is still possible to reach a huge audience by these inexpensive means with the right approach.
The backbone to all class content is its press releases, including interviews, previews and race reports, video highlights and photographs. These are published on the principal website, finnclass.org; distributed to a mailing list of 2,000 journalists, media organisations, sports bodies and sailors; and shared on social media.
Finn Class media output is largely focussed on generating content for use by third parties and shared by social media, including video and photographic materials provided free of charge to federations and news organisations. As such there is little emphasis on generating website hits or event site stats as these are the lesser-used parts of the class media platform.
The Finn class media platform consists of the following:
1. Press releases
Press releases are distributed to more than 75 countries worldwide and published by countless websites. Coverage can only be estimated, but the estimate of total ‘impressions’ of content exceeds 250,000 a day – it is very hard to quantify exactly. Many countries also translate the releases for local readers. During the 12 months prior to August 2016, the class released more than 150 press releases, not only providing perhaps the most in-depth coverage of any sailing event or class in the world, but also providing widespread coverage, and hence great value, for sponsors and advertisers.
2. Social media channels Facebook: Through high quality content and sponsored posts, Facebook followers increased by more than 80% to 12,000 over the six months to August 2016. In terms of reach, outside of events this ranges from 50,000 to 100,000 people, while at the major championships it often exceeds 300,000. However during the Olympics there was a maximum 7-day reach of 1.1 million and a maximum 28 day reach of more than 1.8 million.
Twitter: Twitter is used extensively at class events and is also connected to all other channels. There was an 11% increase in followers between March and August to 4,350. Tweet impressions at the Olympics exceeded 122,000, though at class events this is normally 250,000 to 350,000 through increased direct use.
Instagram: Use of this channel started in March 2016. By August it had 2,500 followers with quality images posted daily from June to August.
YouTube: The Finn class also operates a YouTube channel. It has 2,000 followers with a total of more than 1 million video views.
Flickr: The Finn class Flickr page now has more than 7,000 royalty free photos for editorial use from all major events.
3. Video production
At the class major championships, daily highlights and VNR content is produced and made available free of charge. Since 2015 the class has engaged Beau Outteridge Productions to produce its video content, which has significantly increased the quality and exposure of the material.
Daily highlights are posted on Facebook as well as YouTube. On Facebook there were half a million video views from March to August including 75,000 views (2016 Europeans 2016) and 130,000 (2016 Finn Gold Cup). During the same period, there were 140,00 YouTube views. Facebook Live was also used to great effect at the 2016 Finn Gold Cup.
4. Websites
The class operates five websites. finnclass.org is the ‘corporate’ site and in the year to August 2016 it received just over 370,000 visits serving up 3 million pages. finnworldmasters.com is the platform for the Finn Masters with 25,000 visitors and serving up 300,000 pages during the year ending August 2016.
The class also operates three events sites - finngoldcup.org, finneuropeans.org and finnsilvercup.org. These were established for the class major championships with each year being a new prefix – i.e. 2016.finngoldcup.org – to maintain the annual sites for  future reference. These are used in conjunction with finnclass.org and handle up to around 85,000 visitors serving up to 150,000 pages (2016 Finn Gold Cup).
5. Magazines
The class has published its FINNFARE magazine for more than 55 years, which is distributed worldwide as well as being available as online page turning editions. For the last few years the class has also published the Finn Masters Magazine to cater for the large Masters sector of the class.
6. Stern mounted cameras
The Finn class developed and introduced stern mounted cameras in 2007 and while the current equipment is now dated (early GoPro units) it has produced some exceptional content over the years, and in many respects, better content than the much more expensive equipment used by OBS at the Olympic Games. The challenge now is to move onto the next level, providing live feeds from the cameras - generally 10 cameras are used for each boat in the medal race - fed through the event website. This also negates the need for time consuming and meticulous editing of material from 10 cameras post event.

The Finn Class media package has been developed over decades, but over the past eight years it has been transformed by use of modern technology and social media. Further development is now largely constrained by financial limits, rather than purely ingenuity and industrious journalism.
The story is always of the utmost importance, the challenges faced by the sailors to get to the start line, and then to the finish line. Though the story is often far more important to general viewers than any specific racing action, the Finn class benefits by having some of the most visually striking, athletic and interesting sailors in the sport and getting this across in short action clips, absorbing stories and dazzling photographs is the key driver for the media team each day on the water. Some days are easier than others.
The footage of the two big days held outside Guanabara Bay during the 2016 Olympics would arguably have produced some of the best footage ever taken of the Finn class: huge waves, high winds, with big, strong sailors conquering the extreme conditions, all set against a simply stunning backdrop. It was the perfect combination of conditions for showcasing the Finn and Olympic sailing at its best. However these golden moments generally remain under lock and key. While some viewers around the world did manage to see something of the sailing in Rio, it would appear a lot did not.
The search for more TV coverage, or online footage, produced the most feedback during and after the Games, with many fans desperate to see some action but unable to find any. With the Olympic classes unable to produce any content of their own, it does seem ironic that at a time when the media coverage of classes is under scrutiny by both World Sailing and IOC, that the footage that would enable them to achieve these aims is held beyond reach by the same body requiring the exposure.
In fact the only footage available in the public domain from Rio (as far as we know) is edited highlights of the medal race, lasting just 12 minutes. That can be seen here. Contrast that with several hours, including two full races, from London 2012.
As people's attention span gets shorter and shorter, it is not just affecting the media but also the nature of the sports played out. The call for faster boats, shorter races, smaller fleets and more sensationalist news, will come at a cost. Meanwhile, simply posting reports, photos and updates is no longer enough for the modern generation, where constant, real time updates are required to satisfy the need for instant gratification. That also comes at a cost.
As seen in other areas of the sport, bigger budgets allow a much wider range of coverage options: tracking, live feeds, commentary, graphical representation and interpretation. However, without extensive sponsorship this is beyond the scope of Olympic classes. It is being worked on, but there is no easy answer without significant financial and professional assistance.