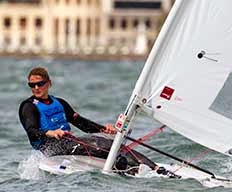 Giles Scott, Alison Young and the Paralympian Sonar trio of John Robertson, Hannah Stodel and Steve Thomas saw the best possible start to their 2015 sailing seasons with double race victories on a high octane first day of the ISAF Sailing World Cup Miami on Monday (26 January).   Those who’d prayed for more breeze after last year’s light wind-dogged edition of the regatta certainly got what they wished for, as 36 knot squalls made for a tough and physical test on Biscayne Bay.

But Finn star Scott, the Sonar trio and Laser Radial sailor Young revelled in the heavy conditions to lay down the perfect start to their regattas – and even an intense morning Miami downpour couldn’t dampen their spirits.
“It’s been a great first day,” said Sonar helmsman Robertson.
“We got two great races – 36 knots in the first one and a bit less breeze in the second but still awesome sailing.  We’re all a bit tired now and ready for a lie down!”
“We’ve been trying a lot of new things with the boat and the rig so it’s good to see that they’re having some improvements so far,” continued the three-time Paralympian.
“Miami’s a really important regatta for us, it’s a good place to come and test against the other guys and see how we’re doing at this point in the cycle.  It’s gone pretty well so far, so touch wood for the rest of the week.”
Scott, defending his 2014 title here, shrugged off talk of extending his 15-month winning streak, insisting “it’s just another regatta” but he too set the pace on the first day of this six-day World Cup competition.
The Finn World and European Champion fended off Australia’s Jake Lilley in the first race with teammate Ed Wright in third, while it was a tight battle in the second race with Croatia’s Ivan Kljakovic Gaspic with the British Sailing Team star once again coming out on top.
“We had a lot of breeze coming offshore, so it was very windy and very shifty but we got two races in pretty quickly and they both went very well and I managed to come away with a victory in both.  It was a good start.”
“In the second race it was top end of what we can race in, but looking at the long range forecast I think it will be a bit of a mixed bag this week, so hopefully we’ll get all the conditions in. “The fleet’s certainly very, very strong and it will certainly be a hard week,” Scott concluded.
As darkness descended, the Laser Radial fleet could only manage two of their scheduled three races, but Bewdley Olympian Alison Young certainly made them count, bagging two wins to set her in pole position at the end of day one.
Young, who won the Melbourne World Cup regatta in December during an intense month-long competition spree, admitted modestly: “I seemed to make a few less mistakes than anyone else so it was a good day on the water.”
“It wasn’t really typical Miami conditions today – pretty breezy, still shifty out there so you had to keep your head out of the boat.  It was certainly a breezy start to the week.
Young continued: “It’s been a busy winter for me so far.  I had a month of racing around the world – 3 continents and four competitions in four weeks just before Christmas.  It’s good to be here as well and racing again.
“It’s a good fleet for Miami.  Pretty much everyone’s here as you’d expect for the first big regatta of the year so it should be good learning and a good challenge.”
Britain’s 470 crews also saw a strong start to their regattas.  Luke Patience and Elliot Willis won the day on the men’s division with a race win and a second to sit them on top of the leaderboard after day one, while Hannah Mills-Saskia Clark and Sophie Weguelin-Eilidh McIntyre took a race win apiece in the women’s fleet and are second and third respectively after two races.
Paralympic Champion Helena Lucas picked up a win in the only race for the 2.4mR fleet with Megan Pascoe in third, while the SKUD duo of Alexandra Rickham and Niki Birrell are second overall with 3,2 on the racetrack today.
Nick Thompson is poised fourth after two races in the Laser class, with him and Alex Mills Barton ensuring a British 1-2 in the second of those races, while Tom Squires is third overall in the RS:X Men's event with Nick Dempsey making the most of his 11th hour admission to the event with scores of 2,2,12 for his opening day.
Bryony Shaw and Izzy Hamilton are fifth and sixth after two races in the RS:X windsurfing fleet. Meanwhile the high performance classes of 49er, 49erFX and Nacra 17 seemed to bear the brunt of the strong winds with numerous capsizes across the fleets in the strong wind, gusty conditions.
Dave Evans and Ed Powys are the leading British 49er crew, in fourth after three races, with Dylan-Fletcher-Alain Sign and Stevie Morrison-Chris Grube in sixth and seventh respectively.
Ben Saxton and Nicola Groves are currently fourth in the Nacra 17 class after three dramatic races for the fleet, while Mother Nature proved too much of a handful for the women’s 49erFX fleet with just eight boats out of 40 managing to finish the only race of the day.
Conditions are set to moderate for Tuesday’s second day of Miami World Cup racing with a full schedule in store across the 13 classes.
Racing continues until Friday 30 January for the Paralympic Classes, with the final medal races for the Olympic Classes on Saturday 31 January.