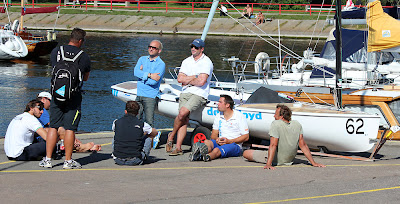 For the third day in a row an early postponement was hoisted at the Finn Gold Cup in Tallinn, Estonia, but unlike the first two days, the wind never built enough to start racing. Racing for the day was abandoned at 15.00. The early morning wind was offshore, and it took some time for the developing sea breeze to kill this off, but when the sea breeze arrived it struggled to increase to more than 5 knots. The sailors were held onshore under just AP so they could be ready to go as soon as the wind arrived, but by 15.00 the PRO made the decision that it wasn't going to happen, and abandoned racing for the day.


There are lots of sailors here doing better than expected, but the tricky winds are playing havoc with the established pecking order.
In his first year in the Finn Milan Vujasinovic (CRO) is exceeding his expectations, sitting in fourth place after four races. He said, “I am happy so far with my performance. I was looking forward to some lighter winds because I am not at Finn weight yet and just came to the class this year. So I am more happy with lighter winds than strong winds.”
“I am also pretty happy with my mental preparation for this regatta, which I think has been most important. These are really difficult conditions.”
“I am a bit surprised by my position so far. My goal was top 15, which would have been a big success for a first year, but so far it is looking good. It's only been four races so far and we all know it's far from over. I am feeling comfortable in strong winds but so far the forecast is not saying that, so I am happy so far.”
Several of the coaches here, and even one of the sailors, were among the group that were denied the chance to compete in the 1980 Olympic regatta by the western boycott of the Moscow Olympics. There is a constant reminder of missed opportunities every day as the fleet sail past the Olympic flame cauldron and the Olympic rings at the harbour entrance.
But all are happy to be in Tallinn. John Bertrand (USA), the Australian coach said, “I hadn't really thought about it much until I got here this year. I really love Tallinn for obvious reasons. It's a great place to sail, and the Estonian people are wonderful. It's been really nice coming back and an opportunity to maybe close that chapter.”
The Canadian coach Larry Lemieux (CAN) added, “ I think partly I agreed with it at the time a little bit because I was so ignorant, but I was just a young kid. In the Olympics your window of opportunity to win a medal is not that big in a sport that is athletic. So that would have probably been one of my best opportunities to win a medal.”
“But I am really pleased to be here after so long. Now I see what the conditions are like here and everything else, it would have been great.”
Lemieux did four Olympic campaigns, but hasn't raced for several years. “I'm not so keen on getting back into competition any more. When you've done it for so long, your body starts to get accustomed to reacting in a certain way to stress, and it's almost an automatic reaction. Even when I've tried to do just a fun regatta, those feeling still come, and I just don’t like that. I used to get the same reaction from coaching, when I first started. I was nervous for them. I'd feel the stress before the race started. It's really weird how that happens. I did the Finn Masters for a while, and the last couple of times I did it, after the first day of racing I'd just be thinking I can't wait for it to be over. That s not the way it should be be. You should be looking forward to it and excited to race. I just don’t have that desire any more and I think it's because I did it so hard for so long.”
The full interviews with Bertrand, Lemieux and Gus Miller will be released later this week.
Despite the lack of wind, it was another beautiful sunny day in beautiful Tallinn, and the mood of the sailors was good despite the lack of racing. Tonight a barbecue is being held in the regatta centre overlooking the harbour.
Racing continues, wind permitting, at 12.00 on Wednesday. The opening series of ten races will be followed by the medal race for the top ten and the final race for the rest on Saturday, 31 August. It can be followed in a number of different ways including the live video stream from ERR, GPS tracking from Trac Trac and Twitter updates on @Finn_Class.