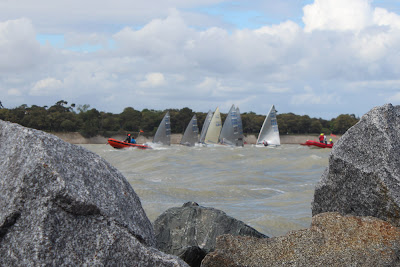 Final days are always difficult for organisers and competitors alike but the final day of the Finn World Masters in La Rochelle was made more difficult by the strong winds and early rain showers that swept through the area. Michael Maier (CZE)) took the world Masters title after winning the the medal race in style, while Andre Budzien (GER) took silver and Erik Lidecis (USA) the bronze. The day began with the first final colour grouping races for all but the top 10. A much reduced fleet headed out into a solid 15-16 knot very cold breeze and were met by an approaching rainstorm.


This ultimately led to a short postponement as the wind killed the wind and the sailors were left slopping around and shivering. However it soon came back but at a reduced strength and one very shifty race was held for Yellow and Blue fleets.
Yellow fleet's start featured a large left hand shift just minutes before the gun with those at the pin almost laying the top mark on port tack. The wind was back up to 10-12 knots so it was fantastic sailing conditions with nice long waves downwind. The leading group of Ray Hall (NZL), Jan Eckert (SUI), Dirk Meid (GER), Piet Eckert (SUI) and Jurgen Eiermann (GER) had a full on battle around the course, eventually finishing in that order.
In the Blue fleet Karl Purdie (NZL) made it a Kiwi double by winning his second race of the series, leading from start to finish, from Uli Breuer (GER) and Franceso Faggiani (ITA). Both Purdie and Breuer paid a heavy price for failing to immediately retire from races on a second yellow flag penalty earlier in the week and both would otherwise have made the medal race. Purdie's scoreline of 4, 2, DNE, 1, 31, 1 is perhaps a warning that he will be a force for the future (though perhaps after reading the rules again).
While the group races were rescheduled for the earlier start time of 10.30 to avoid the strongest of the forecast wind, the medal race was strangely rescheduled for later in the day so that it could be held in the river off the club when the tide had risen sufficiently to lay a course. This was so it could be watched by spectators. It was a gamble as the wind was forecast to rise all day and the Masters has a wind speed limit of 20 knots.
But the medal race got away at 15.30 after one general recall in well in excess of 20 knots. Sailed in the narrow channel just off the marina it was a gusty, shifty race that generally favoured the right side under the town. Regatta leader Michael Maier escaped from a poor start on the first attempt but made the best of the second start to lead round the entire race. Karel van Hellemond (NED) was flagged out of the start for infringing another boat's water and started last. However he was back in contention at the top mark and moved into a comfortable second place on the second upwind. Third place in the race finally went to Andre Budzien (GER) after a close battle with the chasing pack.
This all meant no overall change in the leading three boats with Maier taking a well deserved and record equalling fifth World Masters title after undoubtedly the toughest of all his five Masters titles. Budzien, the three times champion, took the silver while newcomer Erik Lidecis (USA) took the bronze after not really figuring in the medal race.
This year has featured the largest ever entry at a Finn World Masters, with more and more sailors both qualifying by getting older and being attracted to the fleet by the level of competition. Next year the Finn World Masters heads to Sopot in Poland.