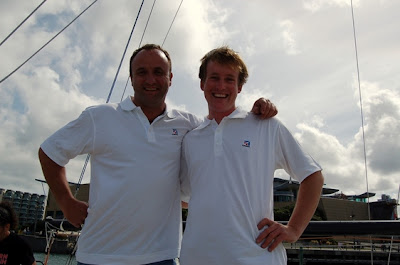 With four days remaining to the start of double-handed, Class40 Global Ocean Race (GOR) Leg 3 in Wellington on Sunday 29 January, South African sailor, Adrian Kuttel, has arrived in New Zealand to join Kiwi skipper, Conrad Colman, for the 6,300-mile course through the Pacific Ocean, around Cape Horn and through the South Atlantic to Punta del Este, Uruguay, on the Akilaria RC2 Class40, Cessna Citation. Both Kuttel and Colman are fully absorbed with pre-start preparation at Queens Wharf in Wellington Harbour. “There are a lot of boat details to complete before we start,” confirms the 40 year-old South African. “We’re checking the sails, provisioning the boat and we’ve put together a programme of three days of training.”
While the duo cram in as much sailing as possible in Wellington Harbour and Cook Strait, Kuttel is looking forward to the challenge ahead and with Colman’s Akilaria RC2 taking first place in Leg 2 from Cape Town to New Zealand and holding the GOR’s 24-hour run record of 359 miles, the duo will be pushing hard: “We’d be disappointed if we didn’t match the last leg’s performance,” confirms Kuttel. “But this is ocean racing and anything can happen, but we’ll do the best we can.”
In Leg 2, the GOR fleet encountered a series of brutal, fast moving fronts that combined with cross-seas and mid-ocean currents to deliver harsh conditions and Kuttel and Colman have already been studying the weather for the early stages of Leg 3 across the Pacific. “I’m very excited about it,” says Kuttel. “I think the weather patterns between New Zealand and Cape Horn will be a bit more stable than they were in the Indian Ocean with a bit more heavy-air, downwind sailing, which we’re really looking forward to.” There is also the issue of known ice fields in the high latitudes of the Pacific and the GOR Race Committee have installed a waypoint at 127.30W and 47S, 2,000 miles WNW of Cape Horn at the southern limit of the bluQube Scoring Gate. “Ice is always a concern,” Kuttel admits. “But the waypoint has been put there by the GOR for everyone to go round which confronts this issue and allows us to focus on sailing.”
While Adrian Kuttel races through the Southern Ocean, his wife, Chiara, and two daughters, 11 year-old Isabella and Sienna who will be one year-old while her father is racing in the GOR, will be following progress from Cape Town. “They have given me a St. Christopher which I’ll be wearing round my neck when we’re racing and Isabella is logged on and will be following me on the race tracker and keeping an eye on me!” His father, Padda Kuttel who campaigned Xargo 3 in the 1981-82 Whitbread Round-the-World Race and Atlantic Privateer in the 1985-86 Whitbread will also be watching closely.
With a background in shipbuilding, mast and rope making, 40 year-old South African yachtsman, Adrian Kuttel’s input to the Cessna Citation campaign has been invaluable. The former charter skipper, racing skipper and watch captain helped Colman with preparation during the Cape Town stop over prior to Leg 2 and completed his GOR qualifier, but he has had to wait until the Leg 3 start in Wellington for a taste of offshore Class40 racing.
Kuttel’s offshore experience on Sir Irving Laidlaw’s Corby 49, Cape Fling, and breaking the Cape Town – Salvador race record on Mike Slade’s 30-metre super maxi ICAP Leopard in 2009 has been part of a process leading towards a short-handed circumnavigation: “My intention was to do the complete race this time round,” explains Kuttel. “But like many of the teams here have found, it was really difficult to get the programme together, but I’m now in the game and keeping keen.” The South African sailor’s ultimate sailing goal is the 2013-14 Global Ocean Race: “Hopefully, this experience will give me the jump on the other teams for 2013 and enable us to do the event very competitively,” he reveals.