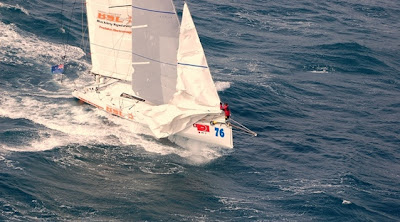 After two days at sea on Leg 3, the double-handed, Global Ocean Race (GOR) Class40s are dropping sharply south-east into the Pacific with the first three boats keeping close formation as they run off the wind in 30 knots of breeze in the Roaring Forties, leaving Chatham Island port. In the 02:00 GMT position poll on Tuesday, the Franco-British duo of Halvard Mabire and Miranda Merron had re-taken the lead with their Pogo 40S² Class40, Campagne de France, after handing over the leadership briefly to Ross and Campbell Field on Buckley Systems late on Monday night and relinquishing pole position to the New Zealand-South African team of Conrad Colman and Adrian Kuttel earlier in the evening as their Akilaria RC2, Cessna Citation, clipped averages of over 13 knots.
Hitting the highest fleet averages at 13.3 knots an hour later, Buckley Systems was back in the lead at 03:00 GMT with Mabire and Merron less than three miles astern and Colman and Kuttel a further nine miles back down the race track.
While the leading trio has been consistently delivering averages of between 11-13 knots, over the past 24 hours, the South African duo of Nick Leggatt and Phillippa Hutton-Squire with Phesheya-Racing in fourth have dropped back around 40 miles behind the front pack and furthest south at 45 degrees, Marco Nannini and Hugo Ramon on Financial Crisis were 63 miles behind the lead Class40 at 03:00 GMT on Tuesday.
On Campagne de France, the transition from a month on land in Wellington, New Zealand, to racing through the high latitudes has been swift for Halvard Mabire and Miranda Merron: “Back into life at sea - trimming sails, changing sails, getting chased by, or chasing, the competition and sleeping whenever possible,” assures Merron. However, adapting was far harder on Buckley Systems: “Both of us were feeling pretty under the weather until this morning,” reports Campbell Field. “Much like a pretty powerful hangover - lack of sleep, poor discipline in eating and in my case anything that was eaten pretty quickly reappeared over the back of the boat,” he adds. “Headaches and grumpiness was the status quo for the first 24 hours on board and I put that down to caffeine withdrawals following the almost hourly dose of long blacks and flat whites from the Empire Cafe in Chaffers Marina, Wellington!”
GOR leaderboard 03:00 GMT 31/01/12:
1. Buckley Systems DTF 5628 13.3kts
2. Campagne de France DTL 2.2nm 12.7kts
3. Cessna Citation DTL 11.5nm 12.2kts
4. Phesheya-Racing DTL 56nm 10.4kts
5. Financial Crisis DTL 63kts 10.8kts