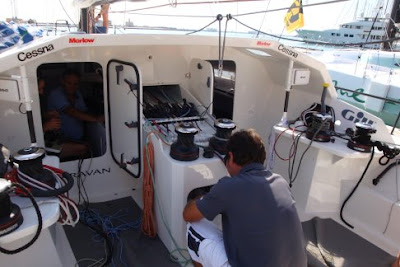 Complex weather conditions in the middle of the Indian Ocean between 40S and 50S are forcing some tough decisions in the double-handed, Class40 Global Ocean Race (GOR) fleet. Furthest north, Phesheya-Racing and Financial Crisis have made painful tacks to the south-west, beating away from the path of a vicious low pressure system – dubbed the ‘Zebra’s Asshole’ by the South Africa team; right in the middle of the Roaring Forties, Campagne de France in third place has fallen into an area of exceptionally light breeze and, furthest south at 48S, Cessna Citation is covering BSL as they run downwind in a band of westerly breeze, timing their gybes for the north-easterly ascent and towards the GOR’s Australian Ice Limit at 45S.
As the South African duo of Nick Leggatt and Phillippa Hutton-Squire crossed the Celox Sailing Scoring Gate north of Kerguelen Island on Monday afternoon, netting two points for Phesheya-Racing, they were both monitoring a low pressure system centred approximately 300 miles NNW of their position. As soon as they were through the virtual gate at 69E, the duo tacked back across the gate on port before tacking again at 06:00 GMT and crossing the gate a third time. “This is not some misguided attempt to score more points for the leg, though we sorely need them!” reassures Phillippa Hutton-Squire. “To the north of Financial Crisis and ourselves, the isobars on the weather chart clearly show a formation commonly known as the ‘Zebra’s Asshole’,” she explains. “This is a secondary low pressure that has formed on the tail of the front that has been crossing the fleet over the past few days and the tightly-packed, concentric black rings of the Zebra’s Asshole indicate a gale with very rough seas approaching.”
With the core pressure of the system plummeting and forecast to track directly into the path of Phesheya-Racing, there was no option: “Tacking is not a decision we take lightly as it means re-stacking everything,” continues Hutton-Squire. “All the unused sails are shifted laboriously to the high side of the boat, the spares, the food, the tools, everything.” At 15:00 GMT on Tuesday, Leggatt and Hutton-Squire were on starboard tack averaging 6.4 knots, south of Financial Crisis and trailing Nannini and Ramon by 56 miles as the gap closes dramatically. “It remains to be seen how our plan works out, but for now, we’re sailing upwind in 16 knots of breeze, it’s relatively warm - 10 degrees for a change - quite dry and the sea has moderated, though it is still quite choppy.” Throughout Monday, The South Africans were in contact with Nannini and Ramon on Financial Crisis, discussing the weather ahead: “After a wet and windy night, they have also taken the decision to head south,” confirms Hutton-Squire. “So, it’ll be interesting to see how the two boats converge again - did we tack too early, or did they tack too late? It’s all part of the game.”
Marco Nannini and Hugo Ramon tacked south at first light [03:00 GMT] on Tuesday: “By the time we tacked, the wind was already blowing a full Force 7 gusting 8,” Nannini reports from Financial Crisis. “Yet, according to the GRIB files, we should have had about 20 knots of wind and it was due to get a lot worse.” The Italian-Spanish duo weren’t keen to chance any further inaccuracies: “We didn’t want to find out what the predicted 35 knots towards the centre of the low would look like in reality,” Nannini continues. “I think we’d expect something in the region of 40 to 50 knots as GRIB files notoriously underestimate the top winds and any prediction beyond 20-25 knots must be treated with due care and respect for the elements.”