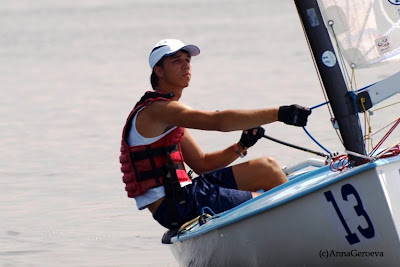 The 2011 Finn Silver Cup for the Jorg Bruder Trophy was officially opened on Monday in Moscow with the raising of the flags from Russia, the Moscow School Khlebnikovo, and the Finn class. The Junior World championship returns to Moscow after four years, welcoming 38 sailors from 14 countries and three continents. The hot favourites for the title include European Junior champion Josip Olujic (CRO), Australian Oliver Tweddell, 11th in Kiel or Egor Terpigorev (RUS), who was second at the Junior Europeans. Terpigorev is leading a strong Russian team of 19 sailors. Among them are some of the youngest Finn sailors. The Kotlyarov brothers from St Petersburg are 16 and 15 years old and have been sailing the Finn since the age of 13. The Finn tradition is very much alive in Russia at all age levels.
A new addition to the Finn family, is Kyrgyzstan with Vladimir Solenyi who has switched his Laser for the Finn and is representing the Asian continent.
While some sailors took their own boats, many others are enjoying the opportunity to use boats and masts provided graciously by the Moscow Sailing School. Sixty complete boats from 2005 have been made available to the sailors and are frequently used by Russian and neighbour countries sailors during national regattas.
The championship was preceeded by a clinic given by 1996 Finn Olympian Paul McKenzie (AUS), focusing on upwind and downwind heel, free pumping technique, and sail trim for the beginners on shore following by sessions on the water with a lot of video taken of the sailors. He said, "The standard is very good for such a big group, and they all seem to help each other to learn quickly."
First race
The wind was very light and patchy over the course with three windward return and laps to try and make a time limit of 60 minutes. After a general recall, on the second start the fleet was massed at the committee boat end with the right side of the course with more wind. The guys who took the right along the shore came out in front of the group in the centre or left.
Four Russians were in front with Julian Massler (GER). The young 17 year old Russian sailor Arkadiy Kistanov made the most of his knowledge of the lake by rounding the top mark ahead of the fleet. Arkadyi who has been sailing the Finn since he was 13 years old at the Moscow Sailing School, sailed a perfect race.
He said, “Today it was a real advantage to know the lake and the wind here. This is my fourth year in the Finn and training for all this time at the MSS helped me a lot today.” Kristanov kept the lead until the finish, though during the last run, the wind died to one knot, just enough for the boats to advance to the gate and the finish line after the race committee shortened the race.
Victor Filippov (RUS) from Moscow was second with Vadim Tsvetkov (RUS), also from Moscow was third. It was certainly a day for the local sailors.
With unpredictable and unsettled conditions, the sailors were sent back to the shore in hope for a better breeze in the remaining days.
Nine races are scheduled from Tuesday 26th to Saturday 30th July. The races will be run by Olympic PRO Hans-Peter Hylander from Sweden on Moscow's northern lake, Klyasminskoye reservoir.