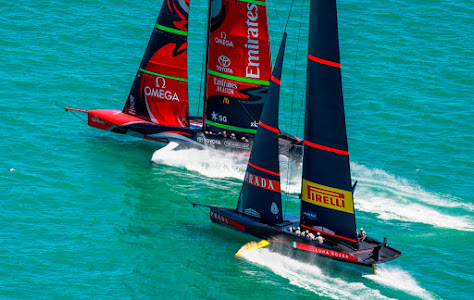 Auckland (NZ), December 17th, 2020 - The PRADA America's Cup World Series, the series of regattas leading up to the January PRADA Cup, kicked off today in Auckland. The event will run through this long weekend, culminating with the PRADA Christmas Race on Sunday.  Race Director Iain Murray chose to hold today’s racing on racecourse C, at North Head, the closest to the coast.  The afternoon was characterized by south-westerly winds that fluctuated between 12 and 17 knots in intensity and made it possible to complete all four scheduled races.

Luna Rossa Prada Pirelli raced twice, first against Emirates Team New Zealand, which ended in favour of the defender, and the second (third race of the day) against Ineos Team UK who was forced to retire due to a foil cant system technical problem.
The leader board at the end of this first day shows American Magic in the lead, with two wins, followed with equal points by Luna Rossa Prada Pirelli and Emirates Team New Zealand.
Four races are scheduled for tomorrow, in which Luna Rossa will face American Magic in the first and third regattas of the day.

RACE 1 – Emirates Team New Zealand vs Luna Rossa Prada Pirelli Team
The first race of the day started on schedule at 3.12 pm, with wind conditions on the course ranging from 13 to 15 knots south-west. In the pre-start, Luna Rossa Prada Pirelli entered the box on starboard and kept to the right side of the course from the start and for the first lengths. At the first cross on upwind leg Emirates Team New Zealand was slightly in the lead, but this increased quickly thanks to an excellent interpretation of the shifty conditions on the racecourse, where the wind changed both in direction and intensity, going from 12 to 17 knots. Luna Rossa maintained a constant distance throughout the first two legs but was unable to close the gap as the kiwi boat increased its lead in the last part of the race, going on to win a little over three minutes ahead.
RACE 3 – Ineos Team UK vs Luna Rossa Prada Pirelli Team
Race three of the day featured Luna Rossa Prada Pirelli racing against Ineos Team UK. With a brilliantly executed start, Luna Rossa entered on starboard and blocked the English team on the right side of the entry box, forcing them to a penalty. Luna Rossa then took the lead with over thirty seconds of advantage over its opponents who, halfway down the first windward leg, had to withdraws due to a technical problem.

Francesco Bruni, helmsman
“In the first race we had a technical issue with our onboard IT systems, but still got to a good start and won the right side of the course, which was what we believed would pay. At the first cross we were slightly behind the kiwis who caught a really good right shift and from that point started to gain. We also made some mistakes in our manoeuvres, especially at the last upwind gate, which cost us several precious seconds.
The second race went better: we were able to force Ineos to the right during the pre-start and made a good call on the distance between the boats, which isn’t easy when you are going at these speeds.
Tomorrow will be another important day, with two races against the American team which we need to beat in both races.”

Pietro Sibello, mainsail trimmer
“It was a rather complicated first day, and we had some difficulties. In the first race Emirates Team New Zealand we sailed below target in terms of boat handling and speed. We need to understand what happened and where we can improve. In the second regatta we sailed mostly alone due to a technical failure of the English boat on the first upwind leg. In any case we are happy with our pre-start performance in which we showed what we can do in a direct clash.”