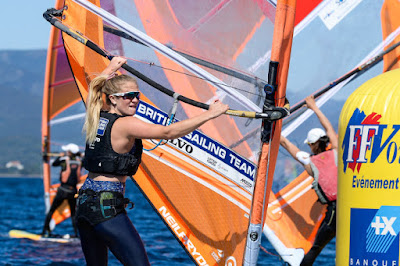 If the RS:X men’s fleet has been all about the Italian city of Civitavecchia so far in the 51st Semaine Olympique Française, Wednesday’s solid 15-knot easterlies – “Classic Hyères conditions” as many of the sailors called them – were all about Perth in the Laser.


Both Laser fleets had Down Under dominance again and two Perth natives won five of the six races. Matthew Wearn had the rare satisfaction of a perfect day, winning all three races from the front in his half of the fleet, to take the overall lead. Meanwhile, his younger rival and training partner, Luke Elliott, won the first two races in the other fleet, before finishing second to New Zealand’s Rio 2016 Olympic bronze medallist and the overnight leader, Sam Meech.
“I’m from Perth so I really like this windy stuff,” Elliott said. “And I think Matt (Wearn), my training partner, who’s from Perth as well, went one better in the other fleet, so it’s definitely a good day for the Perth guys.”

Laser
After six races, the Laser fleet will now divide into gold and silver fleets with five more races over the next two days before the medal race on Saturday. At the moment the forecast is for lighter breeze tomorrow before really big westerlies on Friday and Saturday.
The top 10 and even beyond all look competitive and will fancy their chances of moving up, but realistically the winner is only likely to come from the top five. The four Australians, including the Rio 2016 Olympic champion in fourth overall, and Meech all have fairly clean sheets - important with only discard allowed.
There was even some praise around the boat park for the race committee – rare as hen’s teeth – over their decision on Tuesday not to have a fourth race in marginal conditions. “Making the call reasonably early yesterday to come in and not stay out and do a marginal race yesterday was a great decision,” Wearn said.

They said:
Matthew Wearn (Australia, leader): “We spend so many days of the year training in stuff like this that you’re pretty comfortable. I’ve been itching to get racing this year in these kind of conditions and to come out of the day with a perfect scorecard - you can’t really complain. You do have to capitalise when it’s your favourable conditions, so when you’ve got different conditions later in the regatta you’ve got it up your sleeve a bit.
I basically led from start to finish in all of them, so I didn’t really see much happening in the day, but that group between two to ten was pretty close I think.”
Luke Elliott (Austrlia, third): “The first race I led from start to finish, the second one I was back a little bit - maybe fifth around the top mark - and I had to work my way through. There was a young British guy (Dan Whiteley), who was in front and I think he must have freaked out a little bit because he was first to the reach mark and then he capsized. I was like “oh no”. It was a bit unfortunate and that kind of split the fleet a bit. I managed to gybe inside him really quickly and everyone else got stuck on the other side. That put me in a really good spot on the run, so I was second at the bottom - Sam (Meech, New Zealand) was ahead of me, really good rival and friend as well, we train together a lot as well. I managed to just pip him and overtake him on the last run.
“We were neck-and-neck and 100m from the bottom I got one last wave and had the inside position, so that was quite fun, nice to take a race win off Sam (laughs), he’s pretty quick on the downwind. But he showed me who was boss on the last race. I could just see he (Sam) was really determined to win, on the reach he was flooring it. He really got away. He’d finished by the time I got to the reach mark. I was battling his countryman, George (Gautrey) for second the whole race and I managed to get him.
It’s a good confidence build and nice to have a pretty clean scorecard so far because it’s 12 races and only one drop, so not having anything too expensive is really handy now. It gives you a little bit of room coming into gold fleet.”
Laser Radial
Maria Erdi, the 21-year-old Hungarian, is showing why she is coming force by winning the second of the two races today to keep the pressure on her more experienced rivals. With five races left Erdi trails overall leader, Finland’s Tuula Tenkanen, by just four points and has the better discard. Tankenen won the first race but in the second was passed by Erdi on the second upwind. Erdi also chased down America’s Paige Railey on the final downwind.
In the first race, Railey, who has been training with Erdi since the two arrived in Hyères could be heard shouting at Erdi to hike – further demonstration of the camaraderie that often exists through these Olympic fleets. Erdi needed little help with her hiking in the second race.

They said:
Tuula Tankenen (Finland, leader):“It was pretty similar to yesterday except a bit more windy. We still have a long way to go. In both races I was second at the upwind mark but in the first race I managed to find my phase better in the downwind. In the second Paige was leading and Maria passed me on the second upwind.”
Maria Erdi (Hungary, second place):“I’m pretty happy because the last two events were pretty hard for me and now I’m finally sailing as I know I can. In Palma I got three yellow flags and at the Genoa world cup it was a pretty light event and I couldn’t put it together in my head. I like sailing here (in Hyères), there’s a bit more wind, which I like, I like some hiking. Paige was shouting at me to hike in the first race, whe was right behind me and I was actually taking a moment to look around and I heard her shouting at me “Maria c’mon hike”.
In both races the top left came in. I had some good starts - but always beaten to the mark by those on the left - and some great last downwinds. In the first race I think I gained five places on the last downwind. In the second race I moved into first on the last run, past Paige, we were almost rounding at the same time.
Paige Railey (USA, third place): “It was cool because we’ve been training together, so the two coaches were watching us go down and all the stuff we been working on in training you could see us putting into action, which was really cool. Yeah, I lost the race but to see all the stuff we’ve been doing together and accelerating away from the fleet was really cool.”

RS:X women
China’s Yunxiu Lu moved to the top of the leaderboard with a near faultless day, finishing second in the first race before winning the next two. That moved her  past her teammate Peina Chen – China’s silver medallist at the 2016 Rio Olympics, and the woman who just beat Chen, France’s 2016 Olympic Champion Charline Picon. Picon is just two points behind Lu, after finishing 3rd, 4th and 4th.

They said:Yunxiu Lu:“It’s very close with Charline and Peina, they’re also very good in light wind too. I enjoy the competition. I’m just trying to focus on myself. It’s hard with 15 races and 1 medal race, but it’s the same for everybody.”
“I was 100m behind on the first race, I was late on the start. But I was sixth on the final downwind and the wind changed, I got a gust and caught it.
I was third at the first upwind mark and then I got lucky with a gust and took lead. I was 100m at the end but with the strong wind that’s not really comfortable and everybody is pushing hard. In the last race I got a good start and lead through the race.”
RS:X men
It was another great day for Civitavecchia, as Daniele Benedetti moved into second place overall behind Mattia Camboni, the man he shares an apparment block with in the Italian ciy. France’s Thomas Goyard, fresh from his bronze in the European Championships in Palma at the beginning of April, had his best day so far to move into third, just three points behind Benedetti. So consistent has Camboni been that he has a formidable lead of 18 points, with his ninth-placed finish yesterday his discard.
They said:
Mattia Camboni (Italy, leader):“I didn’t feel fast today. I don’t know why, this morning when I rigged the sail I saw something that didn’t look yesterday. Starboard was really good but on port I had a lot of spinouts - when you lose control on the fin. Only the second race start was really bad, but it wasn’t my fault because one French guy started over, he was UFD and he started just over me and he killed me. I had to go right and I was 16th at the first mark, but I finished 9th which was OK. The other two, fourth and third without good speed is OK. Daniele had a really good day. In the last race he passed me on the port side on the first upwind.”
Daniele Benedetti (Italy, second place):“In the first race, I was second and I lost a position in the second upwind. The rest of the day I was at the front, I won the second race by about 100m and the third by 200m - the same distances as yesterday - but with the stronger wind today that’s not so much of a lead. It’s just the first day that I wasn’t so much in the game, I had some problems with the starts. Mattia is first on the leaderboard I think, our coach is doing a good job (laughs).”
Thomas Goyard (France, third place):“It's a great day for me, we had 12-16 knots of southeast so great weather, we had to go fast, stay left and not make mistakes at the start.”