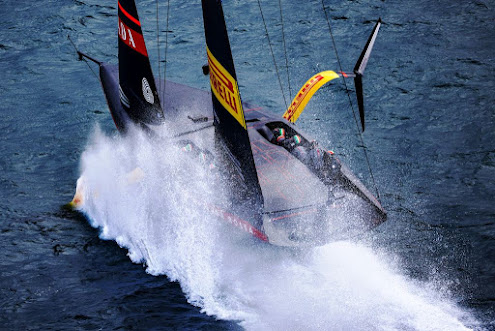 The first weekend of the PRADA Cup closes with a day filled with unexpected events, from the first race cancelled for sudden wind shifts to the major accident involving American Magic.  The day started with a complex weather forecast. The western front, which had already been forecast for days in the northern part of New Zealand, brought strong north winds and rain, obliging Race Director Iain Murray to move the last two races of the second round robin to Course A, furthest north.“The breeze is coming from the north but at some point it will come from the west, then later in the day it will bring rain and thunderstorms” explained Murray at his morning media briefing.  “One of the reasons for going to Course A is its ability to rotate, rather than fight off all of the rocks and reefs. The north-west wind is not particularly good around Course C and you’re very limited on Course B, so we’re on Course A.”
It was a challenging Sunday for Luna Rossa Prada Pirelli who faced INEOS Team UK and NYCC American Magic in a double regatta. The first race against the British was abandoned due to a massive wind shift. The race was rescheduled an hour later, after the wind had stabilized. In the second race, NYYC American Magic, in the lead throughout the race, was involved in a dramatic accident, where fortunately no one was injured but put the boat in serious danger.
The first race starts at 3.15 pm in a condition of 15 knots from the north. Luna Rossa starts on the line with a perfect time on distance, leaving the British boat behind with a penalty to be served for crossing the boundary in the pre-start. Luna Rossa leads for the entire regatta until the second downwind leg when, in proximity of gate 4, the regatta is cancelled due to a major wind shift to the west.  Iain Murray waits for the storm to pass and reschedules the start at 4.35 pm. Same procedure, with Luna Rossa entering on port side a few seconds late, followed by the British from the right. The wind comes from 320 degrees with an intensity of 16-17 knots.
At the cross in the center of the pre-start Luna Rossa protests the British boat but there is no penalty, and racing continues with both boats crossing the starting line on starboard tack. Luna Rossa is in leeward position and manages to keep the left side of the course, forcing the British to go right. At the first cross, Luna Rossa, on left tack, passes behind, but moves to the right of the field and lengthens its lead. At the next cross it crosses in front with a 150-meter advantage. Luna Rossa rounds the first gate with a 10-second lead. The distance between the two boats remains constant throughout the downwind leg, and at the downwind gate the British are 7 seconds behind.
On the second downwind leg however they close the gap, optimizing with gains on wind shifts that throughout the field continue to range from 10-15 degrees. At the second upwind gate INEOS still defends the right and coming down takes a 300-meter lead. In the last two legs the British boat stays in control. Luna Rossa closes the gap on the last leg, but still reaches the finish line behind with an 18 second delay.
In race 2 from the very start Luna Rossa encounters difficulties with the Racing Software, the system that sends data with the configuration of the course from the race committee, which does not transmit data on the position of the boundaries and buoys to the Luna Rossa devices. Luna Rossa is obliged to race in the "dark". American Magic leads throughout the course, until they reach the fifth gate. At this point the American boat incurs in a dramatic capsize right after rounding the final upwind gate. None of the crew on board was injured, but the recovery of the hull and all the equipment is still underway.
The weekend comes to an end with both round robins completed on schedule. INEOS Team UK is undefeated and lies at the top of the ranking, followed by Luna Rossa Prada Pirelli with two wins and two losses and NYCC American Magic with no wins. The qualifying races continue next week with the final two round robins. At the end of these, the best in the standings will move directly to the PRADA Cup final, while the two other teams will compete in the semi-final.