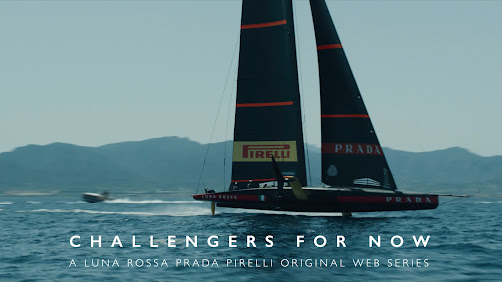 Four new chapters that describe the team's journey towards the 36th America’s Cup presented by PRADA: a story of the events in the life of a group as it grows and adjusts to become a close-knit team.

Auckland (NZ) 5 November 2020 - The second season of the "Challengers for Now" web series is online on the Luna Rossa Prada Pirelli channels: four new episodes that continue the story that started in June, with a focus on the team's challenge for the 36th America's Cup presented by PRADA.

It is a long journey, a story of people and groups, of challenges and obstacles, of determination and commitment to grow as a team that works together without losing sight of one common goal: to win the America's Cup.
The story unfolds in four chapters that describe the team's months in Cagliari before moving to Auckland (NZ), where the first regattas will begin in December 2020 with the PRADA America's Cup World Series and the PRADA Christmas Race (17 - 20 December), followed by the PRADA Cup that will elect the challenger who will race in the Final Match of the 36th America’s Cup presented by PRADA.
During this last period, training has intensified. It has taken many hours of sailing to get to know the boat. It is not simple: the AC75 is a complex and completely new “machine”, and helming it requires teamwork, coordination, and optimized communication. It is a relationship of trust that must be earned every day, through difficulties, sacrifice, and rewards for the entire group.
Luna Rossa is not just a boat that "flies on the water" at 100 kilometres per hour. Behind this ambitious project are hours spent at the simulator, hours spent by the design and shore teams developing the boat lines and building the components of the AC75.
It is a complex project that has reached millimetric levels of precision. Tenths of grams are removed from the hull to gain a tenth of a knot on the water. It is precisely through these fractions of numbers that regattas are won.
Interviews with team members and exclusive onboard images enrich the story with a unique insider’s perspective on the life of a group of over 100 people who over time have developed into a close-knit and motivated team.
This project was produced with the creative support of M&CSaatchi - Creative Partner of the team - and the artistic contribution of the production company Utopia. Film cameras followed the daily activities of the team for weeks, achieving a unique perspective on the constantly evolving challenge of Luna Rossa, as they worked to describe to viewers what it means to be an America's Cup team.

Max Sirena, Skipper and Team Director
“We are happy to continue sharing with our fans and the general public the story behind a project as complex as is an America’s Cup campaign. Ours is a story of sports but also of technology that involves partners, suppliers, technicians. It is a 100% Italian challenge in which the top talents from our country are contributing to make a dream come true: the conquest of the oldest trophy in the world of sports. It is a historical period in which we are particularly proud of representing Italy. We are now facing the final part of our journey that will require even greater focus and commitment to reach our goal. It is a tough one, but it is what we expected, and it is why we are now here in Auckland.”

Carlo Noseda, Managing Partner M&CSaatchi
"We are thrilled with the work done and honoured at having had this opportunity to observe the team so closely. The teamwork required to build the boat and then improve it, with each tack, is unbelievable. We wanted to describe this adventure with special attention for each incredible detail, with the goal of bringing all Italians closer to this wonderful sport. Fair winds Luna Rossa."