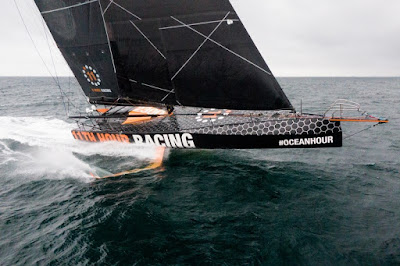 It took longer than expected (and the stash of M&Ms was running dangerously low...) but after 13 days at sea the delivery crew brought 11th Hour Racing Team's IMOCA 60 to Newport, RI last Friday after a successful Atlantic crossing from Concarneau, France. It’s great to be back in the USA, and in the hometown of our sponsor 11th Hour Racing.

Mother Nature threw everything at the team as they sailed across the North Atlantic. Charlie gave a download on the hammering they took at times during the crossing:


To read more about the crossing check out onboard reporter, Amory Ross’ blogs about how he felt he had done ten rounds with Mohammed Ali in the first few days and the experience of encountering this Ocean Sunfish, aka Mola Mola - ‘a modern-day dinosaur’ was how Amory described it.

The sailors are taking time for some much-needed R+R before reconvening next month to kick off the sailing program out of Narragansett Bay. It’s going to be a busy fall for the team as we look forward to meeting with 11th Hour Racing grantees and participating in The Ocean Race Summit - Newport on September 16th.

We’ll be back out training from Fort Adams shortly - look forward to seeing some of you out on the water!