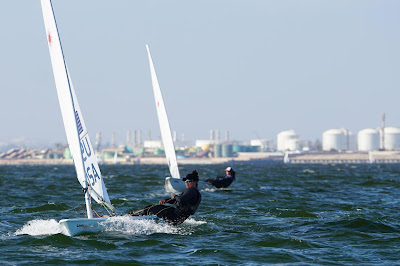 PARACAS, PERU (August 6, 2019) – Day four of the Pan American Games Lima 2019 Sailing events delivered a day packed with racing. Thanks to a southwesterly breeze that filled at about 1200 local time and built throughout the day, each of the eleven classes were able to complete all scheduled races. After today’s races, Team USA has several boats in medal positions.


Day Three, U.S. Pan American Games Sailing Team Standings
Standout U.S. sailors include Mixed Nacra 17 athletes, Riley Gibbs (Long Beach, Calif.) and Anna Weis (Fort Lauderdale, Fla.). Gibbs and Weis jumped into the gold medal position after finishing each of their races in first-place, today. According to Weis, their success on the water is thanks to the recent improvements she and Gibbs have made together, “We’re improving every day as a team. Our speed and communication felt really good today. I think little improvements like that are what has made the difference in helping us do well.”
Their performance is even more impressive when considering that just eight weeks ago, it was possible that the pair would be unable to compete due to injuries. “Recently, I had a bi-lateral fasciotomy, which is, at a super basic level, surgery on both of my arms,” said Weis. “Despite my expected recovery time being somewhat up in the air, I thankfully rebounded pretty quickly and was lucky enough to be able to sail this event.” After Gibbs and Weis finish racing at the Pan American Games, they will head directly to Japan for the Ready Steady Tokyo Olympic Test Event along with Team USA Men’s Laser representative Charlie Buckingham (Newport Beach, Calif.), Men’s 49er sailors Andrew Mollerus (Larchmont, Fla.) and Ian MacDiarmid (Delray Beach, Fla.), and Women’s 49erFX athletes Stephanie Roble (East Troy, Wisc.) and Maggie Shea.
Team USA Women’s Laser Radial athlete, Charlotte Rose (Houston, Texas) also made some significant progress up the leaderboard today. After two first-place finishes today, Rose jumped up to a medal position from eighth place overall. Tomorrow, she will begin the day in second place overall.
Rose is one of the first athletes who spent much of her career in the Laser Radial training with US Sailing’s Olympic Development Program (ODP). “I've been on the ODP track more or less since the program started,” said Rose. The ODP is a program designed to provide structured coaching and training support for young athletes making the transition into Olympic class racing. Rose attributes some of her success at this event and the recent Laser Radial World Championships to her time training with the ODP. “I think that it has played a really big role in helping me grow as a sailor. Not only was I able to be a part of the Gulf Coast Youth Sailing Association in Houston, but I was also sailing with the ODP. That meant that I got to train with a bunch of other amazing athletes and coaches across the country. Now I have the opportunity to train with people like [US Sailing Team Athletes] Erika Reineke and Paige Railey. So I'm really grateful to have that experience.”
Rose, Gibbs, and Weis are among several Team USA sailors that currently stand in medal positions. Open Sunfish athlete Conner Blouin (Tampa, Fla.) also sailed himself into a medal position today. Thanks to a few top-three finishes, Blouin now stands in the Bronze position. Ernesto Rodriguez (Maimi, Fla.) Hallie Schiffman (Sarasota, Fla.) are still leading the Mixed Snipe fleet. Men’s Laser sailor Charlie Buckingham and Women’s 49erFX team Stephanie Roble and Maggie Shea stand in second place, in their respective fleets. Pedro Pascual (West Palm Beach, Fla.) and Will Cyr (Bayview, Mich.) are currently holding the bronze medal positions in the Men’s RS:X and Open Formula Kite fleets.
Racing is scheduled to resume tomorrow at 1100 local time.