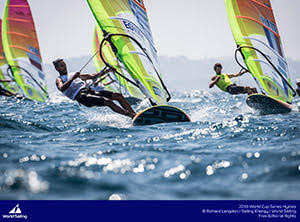 From April 27 to May 4, Hyères, the historic jewel of the French Riviera will once again vibrate with sails on the water and the rhythms of concerts on land for the Semaine Olympique Française (French Olympic Sailing Week). Olympic champions and 2020 contenders will be vying for their place in the sun in the 51st edition of the competition.


The Laser promises to be hotly contested with the two Australians, Tom Burton, the Rio 2016 Olympic champion, and Matthew Wearn, arguably his biggest rival, in a powerful fleet. They will be pushed hard by a strong New Zealand contingent, including Sam Meech, the Rio 2016 bronze medallist and a large British team featuring Elliot Hanson and Nick Thompson.

But the winner of the Semaine Olympique Française last year, France’s Jean-Baptiste Bernaz, will not give up his title without a fight. “I’m very happy that the SOF (French Olympic Sailing Week) has gone back to a format outside the World Cup circuit,” Bernaz said. “That's what I always liked about Olympic Week, it was open to everyone. There were a lot of boats. Last year we were 70 in the Laser, this year we should be 160. It's going to be a great test.”

“This is the last regatta before the European and Worlds. We’re lucky to have Australians, New Zealanders and English coming, so there will be a serious Anglo-Saxon fleet. I always enjoy sailing in Hyères - the Mediterranean is the best. I love this water, and we’ll be a few kilometres from my home waters in Sainte-Maxime. I love this place, I come back for holidays. And now I'm defending champion.”

The Laser Radial will see Belgium’s 2018 world champion, Emma Plasschaert, facing rivals such as USA’s Paige Railey and Britain’s Alison Young.   On home waters, the French champions in the RS:X will surely be the ones to beat. Charline Picon, the 2016 Olympic champion in the women’s RS:X showed her form at the beginning of April by finishing third in the European Championships in Palma.

“For me, Hyères is very important because there will be a really great international field,” Picon said. “And since my return from maternity leave I’ve been aiming to compete in the maximum number of regattas and the Olympic Week in Hyères will allow me to have another a good block of sailing at a good level of competition. I’ve been to Hyères a lot, You can get beautiful sailing conditions. I hope the Mistral will be there so we’re racing in the strong wind.”

Picon’s rivals include Russia’s Stefania Elfutina, the Rio 2016 Olympic bronze medallist as well as powerful Italian and British teams.   In the men’s RS:X, France’s Thomas Goyard will be among the favourites after also finishing third in the European Championships in Palma, but he will also face strong Italian, British and Polish teams.

The quality of the fields will “The quality of the water and the organization in Hyères are recognised internationally, and guarantee a great week of competition” Nicolas Hénard, President of the French Sailing Federation, said.