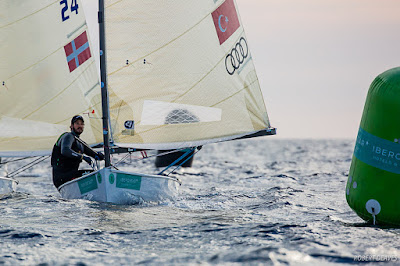 Alican Kaynar, from Turkey, leads the 86 boat Finn fleet after the opening day of the 50 Trofeo S.A.R Princesa Sofia IBEROSTAR in Palma, Mallorca, with two races completed for each of two groups in a late onshore breeze that kept the fleet on the water until early evening. Current European Champion Ed Wright from Britain is second with Andy Maloney, from New Zealand, in third.
After being held onshore for a while, the fleet were released around midday in a light northerly wind. However, apart from a few pockets, it never established itself and just when everyone thought that was it for the day, a southerly onshore breeze built quickly to 8-12 knots and racing got underway.

There was a delay to the start of blue group in the first race, so they ended up waiting for yellow group to finish before starting their first race, but managed to catch up later with another race. But it meant a long day with a sunset finish.   In yellow group the wins went to the 2016 winner here, Josh Junior from New Zealand and Olympic champion, Giles Scott from Britain, who won here last year.
Blue group wins went to Alican Kaynar and Andy Maloney. Behind them the racing was tight and competitive with several national trials for Tokyo being held, adding extra pressure to the sailors.

The fleet is deep by any standards with virtually all top sailors here and eager to prove themselves ahead of May’s European Championship in Athens, where four places are up for grabs on the start line at the Tokyo 2020 Olympics.
Kaynar leads overnight after a third and a first. “It was a long day on the water. The wind started in the north and we had to wait 2-3 hours.”
“After the race started for yellow fleet we couldn’t start. I think there was some problem with the pin and then we had to wait for the first group to finish before we could start”
I was a good day for me. I managed to finish first and third, so I am happy with the results. A nice day.”
Andy Maloney said, “We had an offshore breeze this morning that never really filled in enough to get any racing in. We actually got surprised by a nice onshore breeze in the end, probably 8-11 knots.”
“I sailed pretty well, and executed pretty nicely in that last race to get the win. It’s bee a while since we’ve lined up against the rest of the guys, probably not since Aarhus. We’ve been working pretty hard on some of our weaknesses from last year and it’s pretty nice to see that we had some decent pace today and looking forward to the rest of the week and seeing how we go in other conditions as well.”
Racing continues Tuesday with two more races scheduled and better breeze forecast. Ten races are scheduled through to Friday with the medal race for the top 10 next Saturday.
Results after 2 races:
1  TUR 21 Alican KAYNAR 4
2  GBR 11 Ed WRIGHT 4
3  NZL 61 Andrew MALONEY 5
4  NZL 24 Josh JUNIOR 8
5  CRO 1 Josip OLUJIC 10
6  GRE 77 Ioannis MITAKIS 11
7  GER 259 Phillip KASUESKE 12
8  CRO 369 Milan VUJASINOVIC 13
9  HUN 40 Zsombor BERECZ 13
10  NED 842 Pieter-Jan POSTMA 13