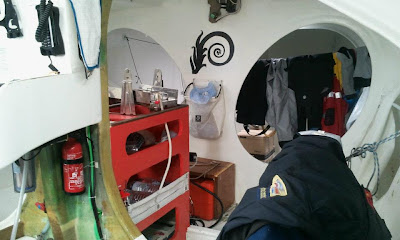 As the low pressure system stalking the double-handed, Class40 Global Ocean Race (GOR) fleet continues to rumble east across the Roaring Forties, it has left the two westerly boats, Financial Crisis and Phesheya-Racing, battered and bruised before moving on the give Campagne de France a hammering. On Thursday morning, the two leading boats, Cessna Citation and BSL, reached the western limit of the GOR’s Australian Ice Limit at 45S, turning round the virtual mark before the heavy breeze arrived, immediately freeing off and accelerating dramatically in the building north-westerly wind ahead of the Southern Ocean depression. At 15:00 GMT on Thursday, Financial Crisis in fourth place was making good progress, leading Phesheya-Racing by 79 miles and separated from the leaders by just over 900 miles, but the effects of the storm were heavily imprinted on Marco Nannini and Hugo Ramon: “Sailing through the stormy conditions of yesterday and the day before was wet, tiring, cold and uncomfortable,” confirms the 33 year-old Italian skipper, Marco Nannini.
“We went down to storm jib and three reefs in the mainsail and beat for hours on end in 35-40 knots with gusts to 45. Through the worst of the winds, when it was blowing solid 40 knots under a rainy sky the colour of lead and charcoal, rain drops would hit your face with such violence they hurt; they hurt your eyeballs when you tried to look forward and any trip to the cockpit involved a total soaking.”
Conditions were worsened by the Akilaria frequently becoming airborne: “The sea state was horrendous as for some reason we keep coming across random surface currents,” Nannini continues. “Sometimes in favour, sometimes against of up to two knots and in the high winds, these currents contributed to stirring a very nasty sea with cross waves and no apparent pattern or sense,” he reports. “Occasionally, the boat would climb a wave from nowhere at right angles and fall from the top into a trough with the loudest of crashes.” With nerves jangling from the repetitive and violent slamming, Nannini and Ramon were on high alert for disaster: “I kept checking the floor and keel box for any signs of damage, maybe I was being paranoid, but with the closest piece of land nearly 2,000 miles away you tend to worry about these things…”
Early on Thursday, the storm jib was replaced by the staysail and a reef was shaken out. “Then it was time for the Solent and now, finally, we’re flying our smallest spinnaker, the A5, and the spirits are definitely much higher although both Hugo and I are tired, the stormy conditions take their toll,” reports Nannini. Averaging 10.9 knots on Thursday afternoon with 4,000 miles of Leg 2 remaining, progress is again being made. “The computer has recalculated the expected date of arrival in Wellington and instead of some crazy date six months in the future, we finally show arriving in the early days of January - fingers crossed, that’s what will happen.”
Separated by around 50 miles at the height of the gale, Nannini and Ramon and the South African duo of Nick Leggatt and Phillippa Hutton-Squire on Phesheya-Racing shared similar, horrific conditions. For Leggatt and Hutton-Squire, two crash gybes in quick succession signalled it was time to dramatically reduce sail: “We went galloping down a wave at full tilt and got side swiped by a monster of a wave and crash gybed!”