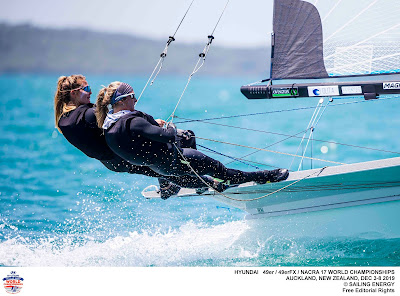 AUCKLAND, NZL (December 1, 2019) - Without a long wind delay this morning, all three classes were able to get some racing in 9 knots that built to about 15-16 knots by mid-afternoon. After four races in the 49erFX and Nacra classes, Paris Henken (Coronado, Calif.) and Anna Tobias are leading the 49erFX fleet, and Riley Gibbs (Long Beach, Calif.) and Anna Weis (Fort Lauderdale, Fla.) are in third in the Nacra 17 fleet.


In the 49erFX class, Olympic sailing veterans, Henken and Tobias, had an incredibly consistent day at the top. While they were campaigning part-time early in the quad, they have a lot of experience under their belt. Henken represented Team USA at the Rio 2016 Games in the 49erFX and Tobias (formerly Tunnicliffe) is the Beijing 2008 Gold Medalist in the Laser Radial. Now that they have been full-time campaigning for over a year, it’s clear the hard work is paying off.
The pair finished two races in first and the final race of the day in fifth. Henken attributes their successful day one on the water to keeping it simple, “We executed the starts really well and had some incredible boat speed which we have been working on all month, here in New Zealand.” She continued, “Our priorities were to minimize maneuvers and just keep the boat going fast.”
Their coach, Willie McBride (Santa Barbara, Calif.) agreed and mentioned that Henken and Tobias had some fun incentives to win. “We have a deal with our Danish Training partners,” McBride said, referring to Ida Marie Baad-Nielsen and Marie Thusgaard-Olsen (DEN), “when either team wins a race, everyone eats a piece of cake.”
McBride also noted that some of their successes of the day were also due to the team behind the team, “Their kite ripped in race two, while they were in the lead. Because of the supporters who helped Paris and Anna get to New Zealand, they had a spare kite and were able to right it up in time to win the next race.”
It seems keeping it simple is the name of the game in New Zealand. Though Nacra sailors, Gibbs and Weis didn’t have any cake incentives on the water, the pair also had a consistent day at the top with three finishes in the top three and all scores within the top five.
“We kept it pretty simple today,” said Gibbs. “We tried to keep our bows clear of any traffic. Making high-percentage moves around the racecourse gave us the ability to sail in more clear air than our competitors. We seem to have decent speed and when we’re sailing in a good lane, going the right direction, we’re definitely not slow.”
While Gibbs and Weis felt some of their decisions were little conservative, they are pleased with their first day on the water. “As they say, you can’t win the regatta on the first day, but you can definitely lose it,” said Gibbs.
After having a two-race head start on the 49erFX and Nacra 17 fleets, Men’s 49er athletes sailed one race at the end of the day. U.S. teams of Nevin Snow (San Diego, Calif.) and Dane Wilson (Ojai, Calif.), and Ian Barrows (Miami, Fla.) and Mitchell Kiss (Holland, Mich.) both finished another race in the top ten. Snow and Wilson currently stand in tied for tenth place and Barrows and Kiss are in 16th.
With the exception of yesterday’s delay, Auckland has been serving up some pretty ideal conditions. US Sailing’s Olympic Coach and Performance Manager, Sally Barkow (Nashotah, Wisc.), noted, “Today, beautiful clear skies allowed for a perfect building sea breeze and sea state today on the outer courses.” Auckland’s tides also seem to be allowing more racing in heavier breeze that would usually create a sea state too high for these boats, “Managing to sail all four races today in the incoming tide kept the waves from getting too massive as the wind picked up this afternoon.”
The competitors at the 2019 Hyundai 49er, 49erFX and Nacra 17 World Championships will resume racing tomorrow at 11:00 a.m. local time. Sky Sport will be broadcasting the entirety of the 2019 Hyundai 49er, 49erFX and Nacra 17 World Championships to their New Zealand Audience. SidelineApp’s coverage of the Worlds will be available to international viewers with a one-time subscription fee of just 14.95 euros. Click here to stream the event live.
U.S. Results at the 2019 Hyundai 49er, 49erFx and Nacra 17 World Championships