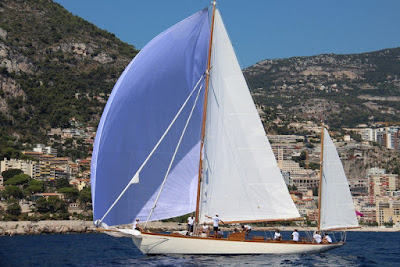 A little over a year after Barbara’s return in the sea, that took place in Viareggio in May 2018, and after participating in some of the most important vintage regattas of 2019, the 19-meter yacht Barbara, that was originally launched in 1923 at the historic English shipyard Camper & Nicholsons of Gosport, won the AIVE Cup (Italian Association of Vintage Sails, representative in Italy of the CIM, International Mediterranean Committee of Yachting) of the Tyrrhenian Sea in the 'Vintage Yachts' category. A result that is not only a great reward to the commitment of the crew that is mainly from Tuscany and Sardinia, but also has brought recognition to the Vele Storiche Viareggio Association that Barbara represents.

During the year, Barbara participated in six regattas, consequently, 1,500 miles traveled, 14 trials and 30 crew members who took turns on board between May and October. Numbers that, combined with the ratings, allowed Barbara, a 19-meter-long (including the bowsprit) Bermudan yawl launched in England in 1923 by the Camper & Nicholsons shipyard of Gosport, designed by Charles Ernest Nicholson, to win the AIVE Cup of the Tyrrhenian Sea 2019 in the category 'Vintage Yachts' (launched before 1950), the trophy established annually by the Italian Association of Vintage Sails.

A victory that rewards the efforts of all the passionate sailors who sailed on Barbara and that makes the Viareggio Historical Sails Association proud, the association was established in 2005 to promote and enhance the tradition of vintage yachting and the historical and cultural heritage that associated boats represent. For the record, the AIVE Cup in the "Classic Yachts" category (launched between 1950 and 1975), went to the 1974 Sangermani Chaplin, the Italian Navy school boat. "Never like this year", declared the president of AIVE and General Secretary of CIM Pier Maria Giusteschi Conti, "the victory was really due to consistency and we hope that this will encourage more vintage and classic boats to return to participate in the regattas".


THE VICTORY AFTER THREE YEARS OF RESTORATION

Among Barbara's famous owners there are such prominent people as Baron Amaury de la Grange, which since 1928 was based in Cannes, and Count Jean de Vogue, owner of the magnificent French castle Vaux-le-Vicomte, who sailed Barbara until the 1960s. In 1982 it was used as a support hull for the Atlantic windsurfing crossing, completed in 24 days. Found in Spain at the end of the 1990s, it was later entrusted to the care of the Francesco Del Carlo shipyard in Viareggio, which completed the philological restoration of the boat between 2015 and 2018.

Barbara's sailing season began at the end of April 2019 in Livorno on the occasion of the "International Sailing Week Naval Academy City of Livorno", where she was ranked first in the "Vintage" class. In June, at Le Grazie in Porto Venere, she participated in "Le Vele d'Epoca nel Golfo" (5th in class 'Vintage') and at the "Argentario Sailing Week" in Porto Santo Stefano (6th in “Bermudan Vintage” class ). In September, after the summer break during which she cruised between Sardinia, Corsica and the islands of the Tuscan Archipelago, Barbara raced at the twenty-first edition of "Le Vele d'Epoca di Imperia", where she finished seventh in the “Bermudan Vintage 2” class.

In the same month she moved to La Spezia, where at the "Mariperman Trophy" she finished fourth in the “Vintage” class. And finally in October, she took part in the fifteenth edition of the "Viareggio Historical Regatta", where it finished sixth. Other events, such as the French Admiral Trophy, the Riviera Trophy and the Monaco Classic Week, were used to adjust the boat, improve its performance and train the crew.

"The yawl Barbara," said tactician Saverio Giangrandi, "does her best with winds of intensity greater than 10 knots. On these occasions she is very powerful on the wave, while in slow wind with waves her performance suffers. She is always one of the first ones at the departures, in the load-bearing gaits she is stable and fast”. "Over the next few months," Giangrandi continues, "we will introduce some improvements to the sail management and on-board weight distribution."