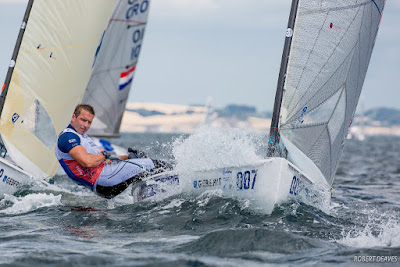 In spite of that, the best have risen to the top. European Champion Ed Wright now leads the regatta, but is on equal points with world champion, Max Salminen, and Nicholas Heiner. Only seven points separate these three from ninth overall. It is a virtual reset of the event as the sailors go into a lay day ahead of the gold and silver fleet races on Monday and Tuesday.
In terms of Olympic qualification this week, the number of nations in the running has dropped from 42 to 24. That number will now reduce almost every race as the points gaps will get larger from now on and opportunities disappear to make the top eight nations.

The final day of the qualification regatta brought slightly cooler temperatures, cloud and the threat of rain. However the competition on the water was as hot as ever with the fight to make the gold fleet cut and stay in with a chance for one of the eight spots for Tokyo.

It stayed dry, but there were significant amounts of cloud around bringing shifts and pressure changes down the course. The wind was coming directly off the Aarhus shoreline, causing disarray throughout the fleet. Huge wind swings and holes played their part as much as sailor skill and decisions.

In Yellow fleet, Tapio Nirkko executed a perfect pin end start, sailed to the left side and crossed back with a nice gap to lead around the course and take the win. He followed that with a 27th in the second race. Regatta leader Pieter-Jan Postma lost around eight boats on the second upwind as a huge shift appeared near the mark, and dropped to 19th, and followed that up with a sixth to stay in the top 10. The second race was won by Salminen, but the performance of the day was from Wright with two solid second places, enough to take him to the top of the leaderboard.

In the Blue fleet Phillip Kasüske continued his good form taking the lead on the second lap and winning the race from Ben Cornish. The second start had the first general recall of the week, caused by a very biased line after the wind shifted. It got away second time with Heiner eventually emerging up the second beat after holes started to appear in the course area. Choosing the right leeward gate mark was crucial and he sailed away to a comfortable win from Tom Ramshaw, who is having an exceptional regatta. He is now in fourth overall.

Kasüske clearly loves these shifty conditions, and is quite used to them having grown up sailing on the lakes in Berlin.

He said, “Today was a bit of a tricky one. We had offshore breeze so it was really important to get a good start and catch the first shift and play it on from there, which I managed to do twice. I had a race win and a 12th, so really happy with my day.”

“Obviously the gold fleet racing will be a lot harder than the racing we did so far, and I am trying my best to keep it all together and get some more good races, to have a good regatta at the end.”


Heiner, “I am not sure if you could make sense of the day. It was just really shifty and went from left to right and over the day we had 60 degree shifts so quite an interesting day, with the pressure everywhere between 14 and 5 knots. It was easy to get it wrong and easy to be at the wrong end of the start line. Luckily I think we put down a great day and pretty consistent, so happy about that.”

On the comeback of Postma and the race to win the place in Tokyo, “It’s great PJ is back in the class. Like I was saying the more good guys we have the better, and you always want to beat the good guys. He has got enough knowledge to put down the results in the past so it makes it more exciting.”

On the gold fleet. “Finally we get to race everybody. It will be great to race against the gold fleet guys. That’s normally when you get to see the big points made and the consistent guys go well and come out nicely. For us it looks like two light wind days, so I just need to be consistent and keep on doing what we are doing and I think we’ll end up with a great result.”

Cornish was frustrated with losing six points on the last lap of the second race – which would have left him first overall – but knew it could have been a lot worse.

“Shifty, puffy day. Not too bad for me, but certainly could have been better. I lost quite a few points in the last race, which was quite frustrating, but to come away with 10 points from a day like that is no bad thing.”

Regatta leader Wright was understandable happy. “I had a good day with two seconds, so should look okay going into the finals.”

“We had a pretty good day out there. Pretty shifty, the wind was up and down, pretty much like the whole week has been. Three days in and now we go into gold fleet and race against each other for the rest of the regatta, which should be interesting. I am looking forward to it.”

“The conditions have been pretty light to medium so far. It would be nice to get some wind in the last part of the week, but it looks like it’s going to be light again. We have a day off tomorrow and looks like that will be windy unfortunately.”


Tokyo dreams
For three Finn sailors in Aarhus, qualifying the nation is not a consideration as Japan, as host nation, is guaranteed one of the 19 places in Tokyo. Japan has had many Finn sailors over the years, but this is the first time in a while that three have sailed an international event.

Hajime Kokumai, Yuki Nishio and Yuji Fujimura are all relative newcomers to the Finn but are in Aarhus this week to soak up Finn knowledge and sail against the best in the world, as well as realising their dream. Each has the goal to get good enough to win the national qualification for a chance to compete in 2020. Their first trials event is at Enoshima Olympic Week this year.

“Last year I did the Youth America’s Cup and I started Finn sailing because I wanted to go to the Games. There was a spot in Tokyo in the Finn so I thought I’d start a Finn campaign. All the good sailors are in Finns and that’s how they get better at sailing.”

“And then I went to Australia. I contacted Rob McMillan, I bought a boat from him. He taught me how to sail the Finn and I have been sailing in Sydney and doing some training camps there. I went to Kiel for my first big Finn regatta and I then ended up here. Rob is coaching us here; he is helping all of us.”
He said the best part of Finn sailing is the free pumping. “Pumping and just riding the waves. That’s the fun part.”


In contrast, Nishio, now 20 years old and 91 kg, came through the Laser route until last year when he decided to mount a Finn campaign. “I took part twice in the ISAF youth worlds and three times in the Radial youth worlds. Now I stepped up to the Finn because I am too tall for Lasers.”

“I also went to Australia for coaching with Rob. That was the first time I sailed Finn. It was very fine and exciting, and I love the Finn now. This is the first regatta for me. It’s very exciting. But we are also here to learn and meet all the other Finn sailors, make training contacts…”

Kokumai continued, “All of the best sailors are here, so I am really excited to be a part of this. Last year when I was till doing the youth America’s Cup or before that in the 470 you never think of this.”

“This is a dream, sailing against these great sailors, but now we are here; now we are doing it.”