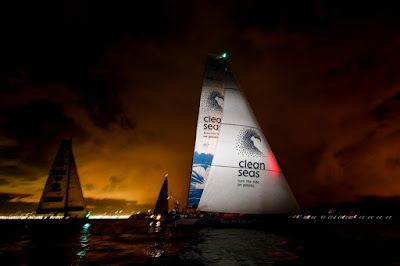 
The team crossed the finish line in extremely light winds at 04:12:44 UTC on Saturday morning. Their time for Leg 7 was 20 days, 03:12:44.
“It’s been a monster leg and we’ve come through and we had to work hard for that finish,” Caffari said moments after crossing the finishing line. “But it’s been like that the entire leg. It’s been hard work and these guys really deserve all the credit for coming in fourth place. I’m so proud of them.”
Turn the Tide on Plastic had a good start to Leg 7, taking an early lead and then battling with the leading group all the way through one of the most difficult Southern Ocean legs in memory.
But after passing Cape Horn, the team noticed an issue with its rig – one of the spreaders (the horizontal struts that help to support the mast) had moved out of position, putting the mast in jeopardy.
After slowing down for repairs, the team found the leading trio had escaped and the goal became securing a fourth place finish, ahead of MAPFRE. The light conditions over the final days made for an agonisingly slow end to the leg, but the end result was a strong one for Turn the Tide on Plastic.
“The team is growing every leg,” Caffari added. “We proved it in the last leg in the lighter winds and flat water and now we’ve proved it in a big wind, big waves condition as well. These guys can take anything on and I back them 100 per-cent every time.”
MAPFRE is the only boat still racing in Leg 7 and is forecast to finish approximately 24 hours behind Turn the Tide on Plastic, in the early hours of Sunday morning (UTC).