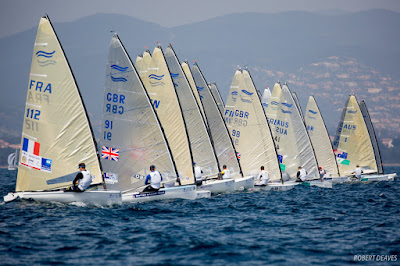 Heiner led the opening race from the top mark and won with a comfortable lead. He was followed round the top by Jake Lilley, from Australia and Mitakis. Lobert rounded a close fifth and moved up to second with Lilley holding on for third.  Heiner, “Kind of typical Hyeres conditions, starting with a nice sea breeze at 8-9 knots dropping to 6 knots and a bit more steady than the second race. In the second we started in about 4-5 knots and a dying breeze.”
He struggled to get off the line cleanly in the second race and placed 11th. “It was a tricky day. I had one really good result and in the second I had the opportunities but it was OK.”


The wind was clearly dying for the second race and after one false start the fleet got away in around 5 knots. Britain’s Ben Cornish led at the top from Croatia’s Josip Olujic and Lobert. Cornish just held the lead round the gate with Olujic rounding the opposite gate almost level. Lobert picked up a yellow flag for kinetics on the first downwind “I was maybe pushing too much”, which put him back slightly. But on the final, shortened, upwind, Zarif slipped through them all to lead down to the finish and take the win from Cornish and Lobert.

Zarif, “In the first race there was a little bit more pressure on the left. I tried to start in the middle, but unfortunately I had to tack to the right. I turned the top mark about fifteenth and then started to recover downwind.” He crossed the line in fifth.

“In the second race it changed completely. We had much more pressure on the right. I had a good start and a good first beat. Then the guys left me alone on the second upwind and I passed Ben and Lobert, so it was a very good day with a fifth and first.”


Overall leader, and runner-up last year, Lobert was quite content with his day’s work.

“It was a light wind day and quite tricky. I managed a second and a third, so am quite happy with that. In the first race I managed a good start and then I could sail in the free spots, so that was good and then I was just following the shifts."