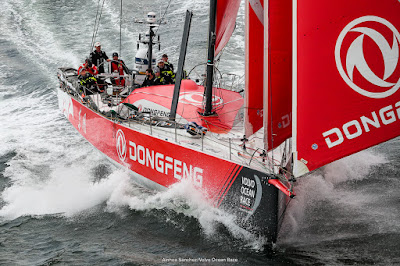 Dongfeng Race Team was able to fend off a late charge by Vestas 11th Hour Racing and Team Brunel to secure a second place finish on Leg 3 of the Volvo Ocean Race from Cape Town, South Africa to Melbourne, Australia.  It’s the second consecutive second place finish for skipper Charles Caudrelier’s team and this one will be bittersweet. The team led for much of this hard Southern Ocean leg and were disappointed to see MAPFRE make a pass to take the win.

But with just one day left to the finish, Dongfeng suffered damage to its keel system and Caudrelier was suddenly looking over his shoulder at Vestas 11th Hour Racing and Team Brunel.
“I hope we can hold on, I think we deserve second place,” Caudrelier said yesterday.
At one point, the Vestas squad posted in second place on distance to finish, but with his boat fixed and the wind returning, Caudrelier and his crew were able to lock down second place and an important 12 points on this double point scoring leg.
“This was the toughest leg I’ve ever done,” Caudrelier said. “We had this big fight with MAPFRE for most of the race and then a big problem on board just before the finish. A crazy section of gybing around the ice limits, it was a very, very difficult leg.
“We’re a bit disappointed after leading 80 per-cent of the time to give first place to MAPFRE, but there are more legs to come and we will do better.
“They have a small advantage in terms of points and we know they don’t make many mistakes… So each point is important.”
The second place finish will move Dongfeng Race Team up to second place on the overall leaderboard, likely equal on points with Vestas 11th Hour Racing (assuming they finish third).
Vestas 11th Hour Racing and Team Brunel are expected to finish in third and fourth place over the coming hours, while the rest of the fleet is over 24 hours away still.