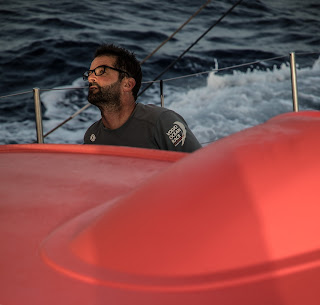 27-10-2017 - Blog from Dongfeng Race Team 0600 UTC - As day dawns on the penultimate day of race 1, a leg which started so promisingly for Dongfeng Racing Team has witnessed one of the best prepared crews of this Volvo Ocean Race campaign fighting amongst the backwaters of the Volvo 65 matched fleet.

After an euphoric start leading out of Alicante, a disastrous first night saw the team slip into a second group of four behind Vestas 11th Hour Racing, favourites MAPFRE, and Team Akzonobel, the latter controversially led once again by Simeon Tierpont.

The feeling on-board Dongfeng Race Team for the past few days has been a repetitive cycle of redemption, frustration and disappointment.  Speaking yesterday morning Skipper Charles Caudrelier said, “There is a big gap between the first three and us. I think the situation is complicated so we may come back on the third one” [Team Akzonobel].

An afternoon then ensued of rued tactical mistakes, with Caudrelier and his navigator Pascal Bidegorry spending much time pacing the deck, wearing the expressions of forlorn men, motionless at times, in search of answers.

Expletives in French could be heard from the Nav Station, to which a crewmember Stuart Bannatyne investigated. The response from Pascal was more softly spoken. “I am angry with the wind” he replied, with an element of sadness coating his response.

How quickly things can change in professional sport however. ‘The horror’ of having to cover that second group away from the warmth of the podium has temporarily lifted. After turning the additional virtual waypoint on an extended course, we are only four NM behind Team Akzonobel and seven ahead of SHK Scallywag, led by Australian David Witt.

“It’s strange to turn around nothing!” Pascal exclaimed about the virtual waypoint. “We try to play a little bit differently compared to him [Team Akzonobel]. The forecast for the next day is quite clear. More pressure, a header, and we’re going to cross a ridge. It’s very interesting and very stressful because I don’t think we’ll have a lot of wind close to Lisbon, and every time it’s a big mess.”

“Do you think we could still make the podium?” I asked. Pascal just looked at me, smiled, and crossed his fingers.