Vendée Globe - Slow down, you move too fast 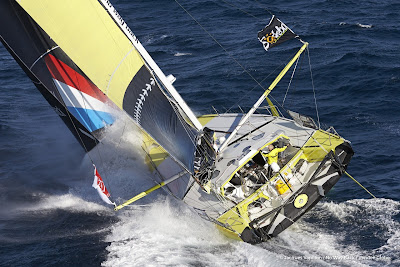 After the arrival of five skippers last week, there are now only two left at sea this morning: Pieter Heerema and Sébastien Destremau. The Dutch skipper has been forced to slow down to attempt to let the gales move away ahead of him in the Bay of Biscay.     “Pieter can’t wait to finish, but I suggested he wait a bit to let the stormy weather in the Bay of Biscay and the fifty knot winds move away. It would be a pity to expose himself to danger so close to the finish,” Jacques Caraës explained, after Pieter Heerema was forced to ease off.


That explains the route taken by No Way Back, which turned back down to the SE for around thirty hours on Friday when Les Sables d’Olonne was celebrating the arrival of Romain Attanasio and Conrad Colman. Pieter Heerema had already extended his route to avoid getting into the Bay of Biscay too soon.

This morning the Dutch skipper is back on the right track towards Vendée, sailing 300 miles off Vigo (Spain) and 658 miles from the finish. In a westerly air stream, he sailed calmly at around 6.5 knots during the night and even that is a bit too quick.

If Pieter kept up this pace he would be around Cape Finisterre this evening and there are 35 knot winds around the headland. Heerema may well slow again today, as the seas are likely to be more manageable between Wednesday and Friday, before another low moves in. It is all a question of timing it right to avoid the 7m waves and 50-knot winds, which will sweep across the Bay of Biscay from this afternoon. Pieter Heerema is due to reach Les Sables d'Olonne on Thursday.

Sébastien Destremau at the rear in 18th position aboard Technofirst-faceOcean… does not have any storms to worry about, but rather the lack of wind ahead. Around 900 miles south of the Azores, Sébastien Destremau is sailing realatively easily in a 15-knot NE’ly wind, but this is not going to last long as the wind will rapidly drop off and tomorrow he will have to cross a ridge of high pressure, which will slow him once again. Sébastien Destremau is likely to finish around a week after Pieter Heerema on around 9th March.
(www.vendeeglobe.org)