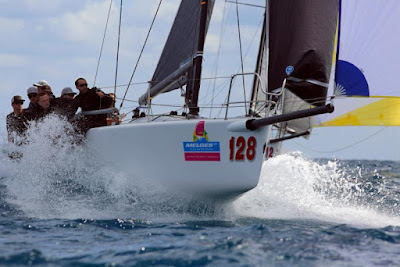 Newport, RI - Thirteen teams from five countries are primed to descend on the sailing capital of the United States, Newport, Rhode Island for the eighth edition of the Melges 32 World Championship, hosted by Sail Newport, launching out of the Newport Shipyard.    Racing begins on Thursday, September 29th, and with a fleet density heavier than the Claiborne Pell Newport Suspension Bridge, the event will undoubtedly come down to the final beat of the final race, but the main question will be which team will be standing atop the podium at the conclusion of the event.
Leading the charge of contenders are the 2015 World Champs on Alessandro Rombelli's STIG. While Rombelli has a star-studded team headlined by tactician Terry Hutchinson, their secret weapon may be his mast man, Luca Faravelli who has won more Melges 32 Worlds titles than any other person on the planet, three overall (B-Lin, 2010; Samba Pa Ti, 2012; and STIG, 2015).

Winning the 2016 US Nationals by the length of a bowsprit just a few weeks ago on Newport waters and competing at a high level for the past few seasons, Richard Goransson's INGA appears to have hit their stride and has come to Newport prepared for a battle. "We love sailing in Newport; the history, the conditions and being here in the Fall is a special time of year," said Gorannson. "Our team is well prepared and we are looking forward to battling it out in this highly competitive class."

No stranger to winning World Championships in the Melges 32 Class, Jason Carroll's Argo team is once again looking to solidify themselves as the most dominant in class history.  No team has ever won three titles, and Jason and the Argonauts will be relying on their steady crew work and some 'home field advantage' to get them to the promised land.

Class stalwarts, Ryan and Rick DeVos will each helm their respective boats Volpe and Delta, and while both teams have compiled impressive wins over the past few seasons, neither has been able to claim a World title. With impressive teams and years of experience, there is a strong likelihood that one, or both DeVos' will be standing on the podium at the end of the weekend.

Winning the first ever Melges 32 Worlds in Porto Cervo in 2009, Pieter Taselaar and his Bliksem team have not raced since the 2012 Worlds in Newport and will look to shake off the dust while returning to World Championship form. Taselaar has pulled together an impressive team with Oracle tactician Tom Slingsby calling the shots and backed up by a wiley group of talented sailors that will have no trouble finding their way to the front of the fleet.

Class veteran Ed Tillinghast has fully re-booted his Dark N Stormy team and after shaking out some gremlins at the Blue Water Series this past winter, his team of young rock stars include the number-one World Match racer Taylor Canfield, and Volvo Ocean Racers Charlie Enright and Mark Towill. They will look to put it all together and have a podium finish.

Racing hard in Europe all summer, Andrea LaCorte's Vitamina, International Class President Giangiacomo Serena di Lapigio's G-Spot and Christian Schwoerer's La Pericolosa are primed and ready to bring the title back to European waters. All three teams have jumped into Melges 32 racing feet first and have ticked all the boxes for a successful result. With a little luck and a few wind shifts in their favor, a foreign anthem may be playing on Sunday.

CORINTHIAN MASH-UP
With three strong teams slated to compete for the Corinthian World Championship title, the racing for the amatuer trophy will be a full grudge match. Competing in their first ever Melges 32 regatta, the Chicago-based team on Lucy led by college professor Jeremy Alexis will have a steep hill to climb, but with a talented group on board, the Lucy team hopes to surprise a few teams.

"We are most looking forward to the opportunity to be on the same race course as some of the best sailors in the world," said Alexis. "I see this as a unique opportunity to experience high-level racing and regatta management... and you get to sail in Newport!  Our expectations are clear - we want to get better at sailing the boat each day. This is all about learning for us - improving boat handling, boat speed, boat prep."

After a solid battle for the U.S. Corinthian title, Chris Wientjes Stormvogel and the kids team on Hydra will be ready to lock horns once racing starts. Just a few weeks ago, Wientjes claimed the 2016 Corinthian Nationals by a slim margin, and will have his hands full fending off the kids who continue their strong learning curve and hope to peak at the Worlds.

Action begins on Tuesday, September 27th with the start of the Pre-Worlds. World Championship racing kicks off on Thursday, the 29th.