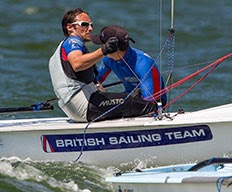 Two-time World Champion Willis teams up with 2012 silver medallist Patience for Rio quest Luke Patience and new crew Elliot Willis are both looking forward to addressing ‘unfinished business’ as they embark on their new 470 partnership in the wake of Joe Glanfield’s retirement. Olympic silver medallist Patience, and Willis, a two-time World Champion in the class, have teamed up in a bid to become Britain’s first 470 Olympic gold medallists at the Rio 2016 Games.

The 30-year-old Willis, who won the 470 World Championships in 2006 and 2008 with former helm Nic Asher, had been sailing with two-time Olympic silver medallist Nick Rogers during the 2013 season up until the World Championships in August.
The Sevenoaks sailor has since enjoyed a coaching stint with the British Sailing Team’s 470 Women’s pairings of Hannah Mills-Saskia Clark and Sophie Weguelin-Eilidh McIntyre.
But having narrowly missed out on the sole 470 selection berth for the 2008 and 2012 Games with Asher, Willis admits there is some unfinished business in terms of his own sailing ambitions, and is excited to be heading back on the campaign trail with Scotsman Patience, with Rio gold firmly in both their sights.
”I’m happy to be getting back into the boat again,” Willis explained. “This is an exciting opportunity to apply the things that I’ve learned from the big long campaign with Nic Asher, and then with Nick Rogers which, although a short campaign, was a very motivating time.”
“The coaching I’ve done since has also given me a completely different viewpoint on the whole sport.  It was a very useful thing for me to have done and hopefully I can now apply that back into a campaign sailing the boat again which is a motivating factor.”
“I’ve known Luke since the 420 days.  I’ve been competing against him for the last eight to ten years in the 470 – I know his strengths and a little bit about his weaknesses and hopefully we can gel and move forward, and some of the strengths and weaknesses I have will complement some of his.”
Patience remains resolute in his drive for Rio 2016 gold, and is excited by the challenge ahead and by the opportunity to sail with ‘serial medallist’ Willis, who he feels shares similar campaign values.
“It’s two and a half years to the Games, which is quite an inspiringly short space of time,” Patience explained.
“It’s not like it’s an epically long marathon that we’re embarking on; it’s short, sharp and intense.  I don’t think that puts us at a disadvantage – I would take the good out of that and say that we’ll be hugely motivated and intent to not lose time from here.”
The 27-year-old continued: “Elliot and I have spoken before about sailing with each other. We’ve known each other for many years now and I think that we probably understand each other quite well.  In the conversations we have about the sport, we’re often in a very similar place in terms of our thoughts and our beliefs in it, so sailing with him is a prospect I’m quite excited about.
“Probably both of us sit here with a bit of unfinished business individually and we’ve brought that together to try and climb that mountain and go through some of those beliefs that we have together.”
The pair will head to Palma, Majorca, next week for training ahead of their first event, which will be the ISAF Sailing World Cup event at the Spanish venue from 31 March-5 April. While they are looking forward to getting out on the water together, Patience is just as eager to begin work out the finer details of their Rio offensive which he hopes will lead them both to the podium in 2016.
“What will be important in these early days is to lay out the foundation of the campaign, and really the foundation of the process, so that when we start building upon that we don’t look back down the line and see that we missed a building block and see that the overall structure is fractured or flawed.
“Putting that process in correctly at the start will benefit us in the long term – and ultimately from my experience there’s a huge amount of pleasure in the process.  There’s a huge amount of confidence and motivation in getting that process right.”
RYA Olympic Manager Stephen Park commented on the new pairing: “Elliot’s been a key player and medal contender in the RYA’s World Class Programme and the world 470 fleet for a number of years.  We’ve benefitted from his coaching input of late, but I’m delighted that we’ll be seeing him back on the racetrack in a class he knows so well and has had great success in over the years.
“Both Luke and Elliot are fantastic sailors and I look forward to seeing their progress together in the months to come, and ultimately hopefully realising their gold medal-winning potential at Rio 2016.”
Read Luke Patience's thoughts on his new partnership in his latest blog
(www.rya.org.uk)