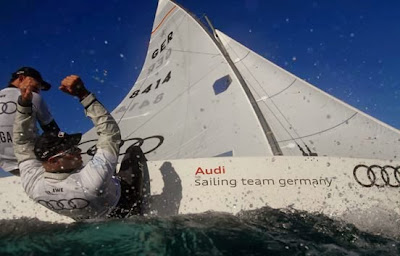 
Germany is truly a power house for the class and Stanjek & Kleen, as well as Polgar and Koy, will be forces to reckon with at the Star Sailors League Final. They have been also in the ISAF world ranking top ten for many years and represent the strongest District 13 skippers attending the 2013 Finals, ranking just behind Michael Hestbaek (SSL 8th).
Polgar's sailing experience includes the Tornado, with which he won a race in the 2008 Olympics in Qingdao. Together with Koy, Polgar won the gold medal in the 2010 Star European Championship during a memorable 132 boat edition in Viareggio, and a silver medal in the 2013 Eastern Hemisphere Championship at Lake Garda behind Diego Negri and Frithjof Kleen. Johannes is looking forward to the first decade of December: "I expect sailing at the highest level with very close racing, in a competition that will be remembered right up to the Olympic games in Rio 2016. I heard that Nassau delivers fantastic sailing conditions - perfect for the setup. I feel honored to be part of this fleet and will fight hard to bring our bow through the finishing line as quick as possible. It is my personal sailing highlight of the year."
Stanjek got off to a great start with the Laser, where he was four time German Champion, with a 2nd place in the 2004 Olympic Trials. After moving to the Star, he was crowned the 2008 European Champion in Hungary. Stanjek also collected several important podiums, most memorably the great battle in Perth (Australia) during the 2011 World Championship where he got the silver medal. A recent highlight of Robert and Frithjof was their class victory at the Fastnet Race. Catching up with him one week prior to his departure for the Bahamas, Stanjek believes that the Star Sailors League Final will be a real challenge: "I am proud to qualify for Nassau and I am excited to race again with the other top teams. If you consider the number and quality of athletes, I think it is very hard to find stronger competition in sailing at all. The Star boat is perfect to compare the skills and art of the sailors, because everyone of them has a huge experience in small keelboats and most of them have many years in the Star class itself."