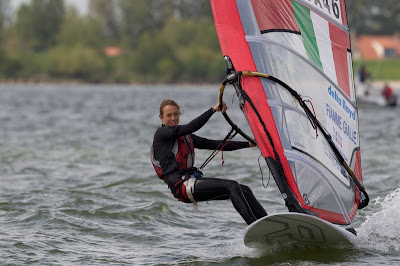 Friday 24th of May 2013 -The last day of finals in the second stage of the Eurosaf Champions Sailing Cup in Medemblik has been full on with the all schedule sailed in all classes. It was an important day as these last races will define the sailors qualified for the Medal races. In the 49er and FX, the three medal races for the top eight have been scheduled at the end of racing today. The FX completed two medal races on the three scheduled. With two wins, it is the German team of Tina Lutz and Susan Beucke who take the title.


“We had two really good races in tricky conditions so we are really proud! This is our first win in the 49ers! It has been a hard week with lots of problems and strong wind and with four races a day it was tough. Our next goal is the European in Denmark, so we will go and train in Kiel for a month and then try to sail good...sailing easy, keep it simple!”
Early leaders, Ida Marie Baad Nielsen and Marie Olsen (DEN) are taking Bronze. Silver is going to German team of Victoria Jurczok who started the medal race stage carrying six points from their opening series placing.
The Danish team of Jonas Warrer and Peter Lang took the title in the 49er after placing 1st, 2nd and 3rd in the medal races sailed in building breeze.
“It was a closed call, very tight in points and great to win. Now we go home to Aarhus where we will train for the Europeans and hope to win!”
David Evans and Ed Powys (GBR) won the last two races to change their Bronze into Silver. Julien D'Ortoli and Noe Delpech (FRA) settle for Bronze.
Today's racing has also selected the top six sailors for the Medal races on Saturday. The series placing is counting for one race in the Medal race stage and will be added to the Medal race score.
Today's races didn't change much in the top rankings and the same sailors keep their lead in all classes at the exception of the RS:X women where Flavia Tartaglini (ITA) takes the first place from Hei Man Hayley Victoria Chan (HKG).
In some classes this means an increased lead for the top placers, however in tomorrow medal races, only the general position will count. Dorian van Rijsselberge (NED) who after winning seven races in the series has a 36 points lead over French man Julien Bontemps, will go in the Medal race with a 1st place and a one point lead over Bontemps.
The medal races are scheduled from 11 am and should deliver the expected drama.