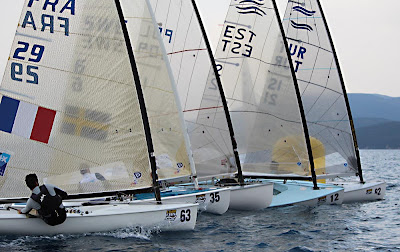 The final day of the opening series at the 2012 Finn European Championship in Scarlino again produced just one tricky race, but has set up a thrilling finale for both the Senior and the Junior Championship. Alican Kaynar (TUR) won the race, but missed out on the medal race by two points. Third placed finisher, and double Finn Junior European Champion, Ioannis Mitakis, takes the overall lead from double European Champion Ivan Kljakovic Gaspic (CRO) and Vasilij Zbogar (SLO). After waiting afloat for more than four hours for the wind to settle and stabilise in one direction, with the committee boat moving around to try and find some wind, finally the fleet was rewarded with another shifty, light race, which again produced a lot of changes to the overall order.

The fleet got away on the second attempt under black flag with the majority of the fleet finding better breeze on the left side of the course. Ioannis Mitakis (GRE) made the best of the first upwind to lead round the top mark from Haris Papadoupoulus (CYP), Pieter Jan Postma (NED) and Alican Kaynar (TUR). Not much changed on the first downwind, with Mitakis extending his lead and leaving the others to fight each other. However on the second upwind, both Kaynar and Papadoupoulus went further to the left, found more pressure and passed the Greek. Many front runners paid a heavy price on this leg as pressure variations played snakes and ladders with the fleet.
The top three held onto their lead on the final downwind to the finish, with Kaynar crossing just ahead of Papadoupoulus with Mitakis in third to take the overall lead of the championship. Behind the leading group, many of the favourites were struggling. Regatta leader Flippo Baldassari (ITA) picked up a yellow flag into the finish to drop to 19th and fifth overall. Meanwhile Vasilij Zbogar (SLO) was making a massive comeback from around 30th at the first mark to 14th at the finish. Giorgio Poggi (ITA) crossed in 11th to drop to fourth overall. Zbogar ends the day in third, seven points off Mitakis.
However the biggest climber of the day was former double European Champion Ivan Kljakovic Gaspic (CRO), who placed sixth in the race to move up to second overall, just six points behind Mitakis. Going into the medal race tomorrow, any of these five has a shot at the title. However only one of them is really experienced in medal races – Kljakovic Gaspic – so despite the points difference, he has to be a clear favourite. But he needs to be careful as he only has a five point margin on fifth place. It's going to be one of those races where the finishing order will almost define the overall positions. It's going to be fascinating.
The Junior is also heading for a thrilling finish. A mistake from leader Michal Jodlowski (POL) allowed second placed Dimitar Vangelov (BUL) to narrow the gap, but these two are assured gold and silver. The bronze is wide open after a high score from reigned Junior World Champion Arkadiy Kistanov (RUS). Any of next seven Juniors can technically win the bronze.
Jodlowski described his mistake, “I was in front of the Bulgarian and I was going in a nice shift on the second upwind and I could probably finish in the top 10, but I decided to keep covering him instead and I dropped about 30 places. I finished ahead of him because he got a yellow flag on the downwind, but I finished worse than my discard so he has narrowed the gap to 16 points. But I think today's race showed I can contain him no problem. So tomorrow I will just stick with him to make sure of it.”
At 21, this is Jodlowski's first and last chance at the title. “It is my first full year in Finn. I had a two year break from competitive sailing, but I did a couple of Polish Finn nationals and as it was my last year as a Junior decided to give this a go. I am enjoying it but I am very light at 83 kg, so we will see. I have been very lucky with the wind here this week.”
On his race win Kaynar, “On the first upwind, the starboard side was the longer tack and we took the breeze from the left side. I managed to get to the first mark in the top 10. Then I took the right side downwind and moved up to eighth at the gate. Then at the beginning on the second upwind I took the breeze again from the left and I moved to second, and then got to first at the top mark.”
Kaynar has been sailing Finns for just three years after switching from the Laser, where he was National Champion. “We have had very tricky conditions this week. But in this regatta Akif [Muslubas] and myself are really fighting hard and we are both doing well. This regatta forms 15 per cent of our Olympic trials, so it is important for us. It is a long trials from Perth to Sail for Gold. I am in front at the moment but there is a long way to go. And then of course we have to qualify the country in Falmouth.”
Mitakis has been in the Finn three years and has already qualified Greece for the Olympics. He was the Junior European Champion in both 2009 and 2010. He said, “I am really happy to be leading at this point. And the weather conditions were really difficult again so it's very good for me. I lost a couple of boats after choosing to go to the right side of the course on the second upwind but I didn't expect to be leading, so am very happy. Tomorrow we'll just have to see what will happen.”
Results after 6 races
1 GRE 77 Ioannis Mitakis 30
2 CRO 524 Ivan Kljakovic Gaspic 36
3 SLO 573 Vasilij Zbogar 37
4 ITA 117 Giorgio Poggi 38
5 ITA 123 Filippo Baldassarri 41
6 NED 842 Pieter-Jan Postma 51
7 EST 2 Deniss Karpak 53
8 ESP 100 Rafael Trujillo 55
9 GER 151 Matthias Miller 56
10 TUR 7 Akif Muslubas 57
Juniors
1 POL 13 Michal Jodlowski 84
2 BUL 855 Dimitar Vangelov 100
3 RUS 6 Arkadiy Kistanov 151