Leadership battle reaches a peak in the Global Ocean Race 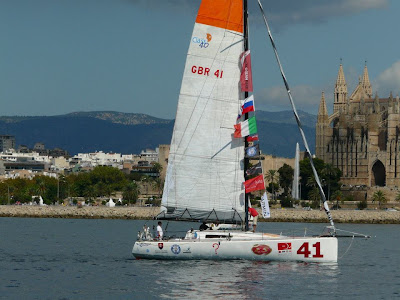 After 23 days leading Leg 1 of the double-handed, Class40 Global Ocean Race (GOR), the Franco-British duo of Halvard Mabire and Miranda Merron on Campagne de France are under serious threat from BSL of the New Zealand duo, Ross and Campbell Field, with the two boats separated by just under four miles after 5,000 miles and 26 days of racing at 15:00 GMT on Friday. As Campagne de France and BSL continue to average between 11-12 knots, the two Class40s are pulling away from the main pack as they lock into following, south-westerly wind while headwinds have already started to stall the remaining four boats, 800 miles to the north-west of the leaders.
Throughout Thursday night and into Friday morning, Ross and Campbell Field kept a solid 12-knot average with BSL: “We have the wind out of the south of between 18-27 knots and we’re beam reaching in a big sea,” Ross reported early on Friday morning. “Wet is the understatement - this Verdier design loves reaching, but is wet, with spray flying everywhere, all the time, 24/7.” By daybreak on Friday, the deficit between BSL and Mabire and Merron on Campagne de France had been reduced by 26 miles. “Not complaining as we are taking good miles out of The French who are directly to leeward.”
Dee Caffari, GOR Race Ambassador and highly-experienced round-the-world sailor, has been monitoring the fleet throughout Leg 1: “Excitement all round for the fleet,” says Dee. “The front runners have experienced some big winds and a manoeuvre for the first time in weeks. They had been happily sat on a port tack since the Cape Verde Islands and now after sailing through an active front they are set on a starboard tack with winds blowing from the South,” she continues. “This wind may be on the north-western side of a big depression, but it is coming from the cold, polar regions, so thermal layers may have been found in the last few days to avoid the chill.”